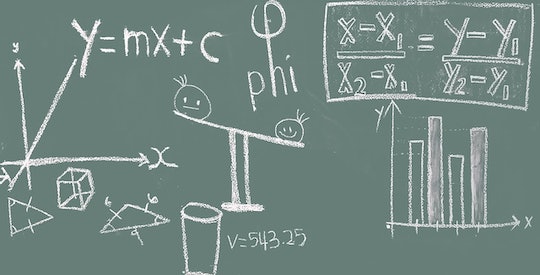 This Third-Grader's Math Homework Has The Internet Totally Puzzled

I don't know about you, but just the thought of grade school math class is enough to get my heart racing and my palms sweating. Even as young as third grade, I preferred to keep my head buried in a book to block out math problems. As far as I was concerned, they might as well have been written in hieroglyphics. And now, thanks to a viral Reddit post, the internet has been teleported back to that confusing land of numbers. Behold, this third-grader's math homework that has the internet totally puzzled. That's because one of the questions is totally impossible to answer, and it's not just right-brain me saying that. See for yourself.

It all started when a Mississippi mom named Dusty Sappington noticed that something was... off about one of the questions on her 8-year-old daughter Izzy's math worksheet. Obviously, Izzy was stumped, and so was her mom. And, listen, you will be, too. The question — a photo of which Sappington shared on Reddit on Tuesday — reads, "Janell had 15 marbles. She lost some of them. How many does Janell have now?"

WELL. That's quite the thinker, isn't it? Perhaps especially for all you math wizards out there (unless someone's worked out a definitive answer. I'll wait.).

The eternal mystery of Janell and her marbles is smushed up between much more reasonable questions with actual, concrete answers, which math is so fond of. Eric, for example, took a little hit to the wallet when he started out with $15, bought a reasonably priced $6 hat, and now he has $9 to his name. Suzanne's magazine collection of five grew to a magazine collection of seven when her sister bought her two more. But Janell? Did she lose two of her marbles? Or five of them?

No wonder little Izzy — who seems to have been crushing the homework game save for that pesky, vague question — answered with a question mark that just screams WHAT THE HECK?

And, well, Reddit commenters ended up losing all their marbles over it. So, even though we may never know how may marbles Janell lost, we know she has more than user Lenny here, for example, who jokingly tried to solve the puzzle in the comment section:

Some users were understandably perplexed. "Today I learned that I'd possibly score less than some 3rd graders on math homework. I used to be so confident and cocky," funk_dunk wrote.

Some proposed answers to the question got philosophical. "She still owns them even when she doesn't know where they are," user ASpiralKnight wrote. "They just want you to understand how Janell feels," solinaceae opined.

As for Spaddington, she shared the photo on Reddit "mainly for amusement," as she told HuffPost:

Being the mother of a third-grader and a fifth-grader, I have seen a lot of homework over the years that has our family laughing at the absurdities, scratching our heads and relying too much on Google.

In the end, Sappington told Romper that she was able to touch base with Izzy's teacher and learned that the correct answer was for Izzy to "come up with her own answer." Izzy was credited for the question mark she put down.

More Like This
New Barney Docuseries Will Dive Into The Dark Side Of The Beloved '90s Kids' Show
Every State’s Favorite Halloween Movie For Kids In 2022
You Can Stay At A ‘Hocus Pocus’ House On Airbnb — And It’s In Salem!
What Parents Need To Know After DEA Issues Warning About "Rainbow Fentanyl"