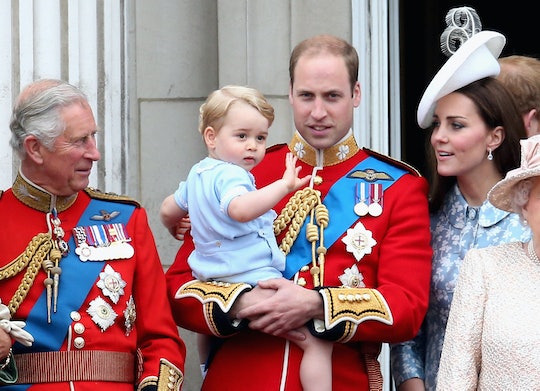 Prince Charles Looks Like Prince George In This Throwback Photo

The United Kingdom's royal family's genes are strong, and it's clear to see this in the youngest generation of the royal family. Prince George, his siblings, and his cousins all bear a huge resemblance to their family members. And if you can't see that, then this throwback photo of Prince Charles proves that he is Prince George's twin. The little royal looks exactly like his grandfather.

The royal family is so rich with history — there are so many photos and relics from decades ago. And although the smallest generation of royals are absolutely fascinating, it's fun to look back on photos from the royal family from years and years ago, if only to be reminded of how different it was back then. The Royal Family Collection Trust is a great account for fans of royal throwbacks to follow on Instagram. The account, run by a charity that cares for the Royal Collection Trust often posts amazing throwback photos of the family, and their post on Sunday was no exception to this.

The account shared a photo of Prince Charles at Queen Elizabeth II's coronation, which took place on June 2, 1953. In the photo, the queen's first born son can be seen standing next to his grandmother and aunt looking a little upset. The photo is a great throwback, but the best thing about it is how much Prince Charles looks exactly like his grandson, Prince George.

It's easy to see how much he looks like Prince George in his face. They have the same chubby cheeks, the same ears, and the same sunken in eyes. Prince George is also known to wear a bored expression on his face from time to time. When this photo was taken at the coronation, Prince Charles was just five years old — the same exact age that Prince George is, now.

They have a lot in common. Prince Charles is going to be King one day, and Prince George will follow in his footsteps quite a few years later. The smallest prince has some pretty big shoes to fill. But until that happens, it sounds like Prince Charles and Prince George have a great relationship, when he can keep up with his grandkids and their high energy.

It's hard to argue with the facts — Prince George looks exactly like his grandfather right now. But, people should give him a few years to see if this sticks.