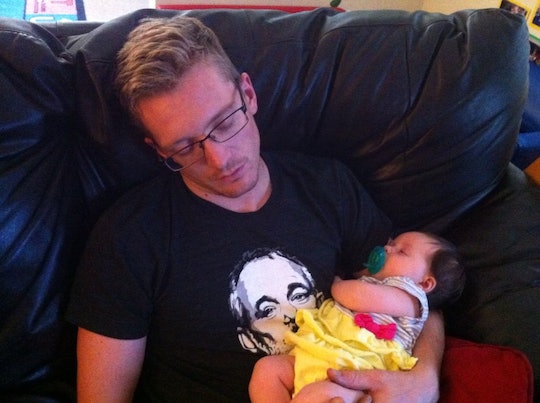 I'm So Grateful To My Husband For Helping Me Wean

The decision to wean my last baby was definitely not an easy one. I remember those first days of his life when he refused to latch, and I cried endlessly over the thought that I wouldn’t have the chance to breastfeed him at all. Then after we finally made a breakthrough on the fifth day, I continued to breastfeed him longer than my other two babies combined. By the time he reached 20 months, I had to admit I was ready to be done. But I definitely couldn’t have weaned without my partner, and he provided an incredible amount of support throughout the weaning process.

The truth is, my husband wasn’t always able to help me along the bumps in the road I experienced while breastfeeding. He wanted to solve unsolvable problems, like the sadness I felt when my daughter self-weaned at six months, or the envy I felt toward other moms when I had undersupply. He wanted to support me, but he didn’t exactly know how. Breastfeeding was the one area of parenting from which he was mostly cut off. It was my challenge to experience alone, for better or worse. I had assumed that weaning might be the same way. It was my decision to make and since I was the one with the boobs, it was obviously my habit to break as well. I knew it wasn’t going to be easy, but at that point I knew it was going to be worth it.

There were plenty of reasons why I was ready to be done with breastfeeding. I was ready to feel like my body belonged to me again after I'd spent the better part of the last seven years housing and feeding babies. I was definitely ready to even out my boobs (especially since towards the end of our breastfeeding days, my son fed exclusively on one side) and finally buy a non-nursing bra that actually fit me. I wanted him to stop whining for boob every time he tripped in public, or started getting sleepy. Most of all, I felt as ready as I possibly could be to close this chapter of motherhood, and I was happy with the fact that we had a good long run with breastfeeding.

Finally, my husband could take an active role in our breastfeeding journey, even if it was helping to bring it to a close. Finally, here was something he could fix.

But when the time came to wean my last baby, it was lot easier said than done. While he didn’t breastfeed often anymore, he was adamant about nursing at nighttime, especially since he was still often in our bed. After bed-sharing for 18 months, he frequently ended up in our bed at night, unwilling to sleep through the night alone. The easiest way to comfort him when he transitioned from his bed into ours at 1:00 a.m. was popping him on the breast for a comfort feeding, and letting him drift back to sleep.

My husband had been waiting for this type of problem-solving moment all along. Finally, he could take an active role in our breastfeeding journey, even if it was helping to bring it to a close. Finally, here was something he could fix. When our son would wake up in the middle of the night crying to come into our room, he would go in and give him a bottle, walking with him and soothing him until he fell back asleep. Sometimes it would take 20 or 30 minutes, and our son would wake up often, dissatisfied with the fact that I was not by his side, ready to be his human pacifier. My husband went through this ritual sometimes four or five times a night, all so I would be able to wean more easily.

My husband knew that my willpower wasn’t great at night. Had I been the one to wake with the baby and try to put him back to sleep in his own room, I surely would have breastfed him to keep the peace. Honestly, if I was my husband, I probably wouldn’t have had the patience to keep up with this difficult routine, knowing that there was an easy fix of breastfeeding waiting in the next room.

My husband took on the full responsibility of nighttime weaning, and helped us come to a comfortable end with breastfeeding. I didn’t have to test my strength against our son’s crying, or feel overwhelmed by guilt as he clamored for my breast. His dedication to taking the night shift made all the difference when I was weaning, and made it a team effort instead of a hard road I had to trek alone.

More Like This
How To Support A NICU Parent, From Moms Who’ve Been There
The Difference Between The PICU & The NICU
Introducing My Boyfriend To My Kid
30 Adorable Baby Halloween Costumes, From Animals To Avocados