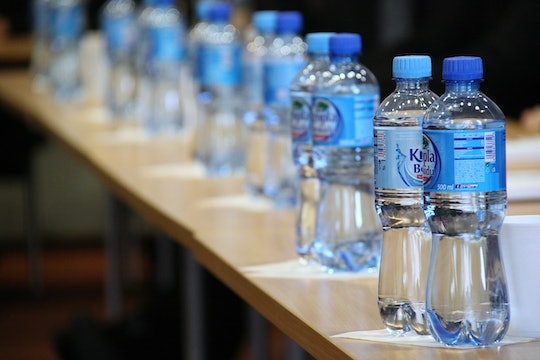 By now you've probably seen those videos of people trying to flip a half-full water bottle and make it land upright. It's harder than it looks, as anyone who has ever given it a shot can attest. Well prepare to feel worse about your skills. Proud papa Matt Rogers shared this sweet home video where his toddler nails the water bottle challenge and then celebrates with the cutest, teeniest dab ever performed.

Rogers is probably familiar. He's a country singer and television host on the Hallmark Channel, so he knows a thing or two about putting on a quality show. And it looks like his baby girl Sam is already a natural. In the video, the curly-haired cutie only needed two tries to flip her baby water bottle and stick the landing. The crowd around her goes wild, and then, with a little direction from good old dad, she celebrates with a very adorable dab.

"My baby girl sticks the #BottleFlip and finishes with the #dab," Rogers captioned the video, first posted on Facebook. Since then, the video has blown up on social media, racking up nearly 200,000 "likes," another 200,000-plus "shares" and a whopping 77,000 comments. Who knew a baby water bottle challenge topped off with a dab would take the world by storm.

"Her face is priceless once she realizes she did it," one commenter wrote on Rogers' Facebook post. "Uber cuteness right there."

The toddler bottle flip video was also shown on TODAY, prompting host Carson Daly to admit he would have "hit the golden buzzer" if Sam was able to do that on America's Got Talent.

Now that's she's a real deal social media star, Baby Sam has her own Twitter feed @TheRealBabySam, and is identified as "Baby Sam Curly Queen" on her profile. Her account tweeted out the video with the caption, "I had my brothers #FlippingOut #BabyBottleFlip."

But the best part of the video is the dab at the end, which no one should ever attempt again because there's no way to top Baby Sam's effort. Even football star, Cam Newton, who, according to Sports Illustrated started the whole dab craze, can't hold a candle to Sam. Bow down.

Rogers, according to his biography on The Hallmark Channel, where he hosts the docu-series Coming Home, first rose to fame as a country-singing finalist on Season 3 of American Idol. Since then, Rogers has earned TV credits hosting Discovery Channel's Really Big Things, among other shows, and working as a correspondent for shows including Entertainment Tonight and Access Hollywood.

Rogers has three kids, all of which can be seen in the video — Brayden, Mason, and baby Sam — with his wife Teri Himes, according to the Hallmark Channel.

Now it looks like there are two mega-watt stars in the family.