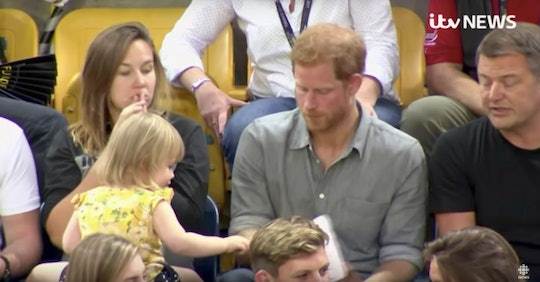 This Toddler Strealing Prince Harry's Popcorn Has Her Priorities Straight

Ah, popcorn. The universally appealing snack that just about everyone loves to munch on. Seriously, whether it's at a movie theater, your living room couch, a road trip — or whether it's covered in butter, caramel, salt, or cheese — one thing is certain: popcorn is basically irresistible. And that's something that one little girl in particular knows all to well. Yeah, this toddler stole Prince Harry's popcorn during the Invictus Games in Toronto this week, and the royal's reaction will make you love him even more.

According to BuzzFeed, Prince Harry was sitting next to Paralympian David Henson, and his family, wife Hayley, and 2-year-old daughter, Emily. And while all eyes might have been on the royal, who was busy chatting it up with someone else seated next to him, it was little Emily who totally and completely stole the show. Sitting on her mother's lap, Emily started to get a little hungry during the games. So, what's a girl to do? Ask her parents for some food? Maybe raise her hand to request some craft services? Well why should she waste her time with that when there was a perfectly good bucket of popcorn right next to her?

Of course, that popcorn just so happened to belong to none other than the (current) fifth person in line to the throne, Prince Harry himself, but that didn't stop Emily. Maybe Emily knows that the birth of Prince William and Kate Middleton's next baby will push Harry down to be sixth in line, so she just didn't feel the need to deal with all those rules? Honestly, who knows? For whatever reason, Emily had no qualms about getting her hands on the goods, and when Prince Harry noticed, it somehow managed to get even cuter.

Instead of getting mad (which, let's be honest, a lot of us would be pretty annoyed if someone was stealing our snacks), Prince Harry instead just simply laughed and played with little Emily. In fact, he even went so far as to continue to share his popcorn with the tot, and tease her a little with the popcorn.

Obviously, this moment just further proves that Prince Harry is a total dreamboat, and also great with kids — a pretty magnificent combination. Of course, everyone was expecting to see Prince Harry and his girlfriend, American actress, Meghan Markle, make their first public appearance together at the games. So, Prince Harry's interaction with little Emily was quite a welcome surprise.

As Prince Harry's older brother is soon to become a father of three, many are wondering when he'll start planning a family of his own. Of course, as his relationship with Markle seems to only be intensifying, it could be a mere matter of time before a ring is spotted on that one very special finger.

But, for now, the video of Prince Harry getting his popcorn stolen by a very sly Emily will have to suffice when it comes to seeing the royal with cute kids. Well, Emily, and of course his adorable niece and nephew.

If nothing else, I think we can all agree that Emily has given us all a new kind of expectation when it comes to seeing Prince Harry out in public. Seriously, Prince Harry holding hands with his girlfriend? I mean, that's pretty cute. But, Prince Harry playing with an adorable toddler and sharing his snacks with her while she gets her fill of free popcorn? That's the kind of content I like to read and watch.

Here's to you, Emily. You get your popcorn, girl.