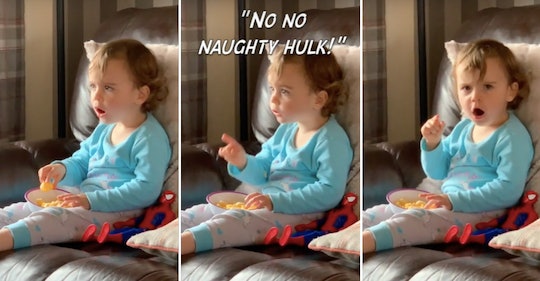 There are some moments in cinematic history that are simply too universal to deny. Who doesn't shed a tear when Rose tells Jack she'll "never let go" and proceeds to, uh, let him go into the ocean, or drop their jaw when a certain big, green superhero shows his strength? It truly doesn't matter what age you are, some things are just too unbelievable to deny. This toddler watching the Hulk's transformation for the first time is extremely relatable, and is honestly probably what was going on in your head, too.

On Wednesday, a Twitter user named Paddy Raff uploaded a short video of his daughter watching Hulk for the very first time, and pretty much reacting the way we all did at one point. The video starts with the 2-year-old sitting on the couch and babbling at the TV. As the scene shifts to the one where Bruce Banner becomes the Hulk for the first time, she begins by waving her finger and saying "No, no, naughty Hulk," and then getting quiet as the scene progresses. At that point, she looks at her dad, starts yelling "No!" more loudly, and then her mouth drops and she gasps as she points at the TV.

Stunned, she then continues to eat her cheese puffs, totally floored by what just went down. "Is he wrecking the place?" her father asks. She continues watching intently, and eating her snack. (Told you, highly relatable.)

The post, which currently has over 9,000 retweets, 82,000 favorites, and over 1 million views has generated a lot of attention over the past 24 hours.

"My 2 yr old daughter’s reaction to seeing the Hulk go bananas for the first time," Paddy Raff captioned the video he shared on Twitter on Wednesday. The next morning, he updated fans, showing his daughter kneeling by a few bowls, with her Avengers dolls lined up against the wall. "This was her this morning feeding her #Avengers breakfast," he added, which honestly made the entire thing that much cuter. (Seriously, she thinks her Avengers need her to give them something to eat, if only she knew.)

Save to say, many followers agreed that the video was indeed beyond precious, and shared stories of their own kids and grandkids reacting to major cultural figures over the years. "Aww this reminds me of my now 17 year old daughter, who watched the first Hulk film at the same age and kept shouting 'Shrek is a bad man!'" one person responded.

"Oh, this reminds me of when my youngest was about 4-5 yrs old, and he was watching a Spider-Man. I think he was fighting Venom? Anyway, oh, all the talking Spidy through the fight, like he was his coach or something," said another. "Love the way it only distracted her from the snacks for a few seconds... she has her priorities right," said yet another. "The cheese puff falling out of her mouth at the end makes this so relatable," added one more.

Overall, this falls pretty high up there on the "cuteness" radar, right alongside being almost a little too relatable. Who doesn't gasp at Hulk while eating cheese puffs? Actual monsters, that's who.

More Like This
Quinta Brunson Got A Sweet Card From A Kid On Abbott Elementary After Her Emmy Win
'Squid Game' Is Coming Back For Season 2 On Netflix: Here’s What Parents Need To Know
Quinta Brunson Had To Give Her Emmy Speech With Jimmy Kimmel At Her Feet
The FDA Is Worried People Are Cooking Chicken In NyQuil