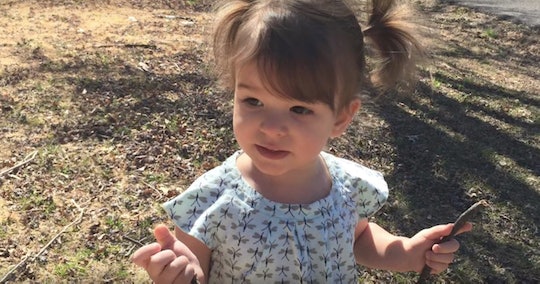 This Toddler’s Brain Damage Was Reversed

When Eden Carlson was just 2 years old, she wandered past a baby gate and a heavy door before falling into the family's outdoor swimming pool in February 2016, according to Newsweek. The water temperature at her Fayetteville, Arkansas home was just 41 degrees Fahrenheit and the toddler was submerged for at least 15 minutes before she was discovered by her mother. Despite Eden's mother Kristal performing CPR until an ambulance arrived, Eden experienced cardiac arrest and a prolonged lack of oxygen, leaving the 2-year-old with severe brain damage. Almost six months after the accident, Carlson's brain damage was completely reversed — and this therapy could offer hope for toddlers with brain damage following similar near-drowning accidents, according to The New York Daily News.

Dr. Paul Harch, clinical professor and Director of Hyperbaric Medicine at LSU Health New Orleans School of Medicine, worked with Carlson and her family after she was resuscitated at Arkansas Children's Hospital but was completely unresponsive to stimuli and left unable to talk or walk, according to a statement from LSU. Using hyperbaric oxygen therapy, Carlson regained full ability to both walk and talk and her brain damage was fully reversed less than six months following her near-drowning. Harch and his team are hopeful that similar oxygen therapy could reverse brain damage in toddlers who experienced severe oxygen deprivation as Carlson did.

After Carlson was resuscitated, she spent 35 days in critical care at Arkansas Children's Hospital before being discharged home, where she still remained unresponsive to all stimuli, with severe squirming and head shaking. It was at that point Carlson's family consulted Harch to try and help repair the damage to her brain using oxygen therapy, according to a case study published in Medical Gas Research. Carlson underwent 23 days of normobaric (sea-level) oxygen therapy for 45 minutes twice a day. Her recovery just during those first three weeks was astonishing. From the case study:

Carlson was then transferred to New Orleans, Louisiana to commence hyperbaric oxygen therapy, as this was the closest hyperbaric chamber to the recovering toddler. Typically associated with decompression sickness in scuba divers, hyperbaric oxygen therapy involves the inhalation of 100 percent pure oxygen in a pressurized environment, according to the Mayo Clinic. Carlson underwent hyperbaric oxygen therapy for 45 minutes at a time, once every day. After 10 sessions, Carlson's mother reported that her daughter was "near normal, except for gross motor function," the case study noted.

After the completion of 40 sessions of hyperbaric oxygen therapy and 162 days after Carlson nearly drowned, an MRI revealed she had a near-complete reversal of brain matter atrophy and only mild residual injury, the first such result of its kind using this kind of therapy. Harch remarked in a statement, "The startling regrowth of tissue in this case occurred because we were able to intervene early in a growing child, before long-term tissue degeneration."

Carlson is one incredibly lucky child, and while her case is the only one of its kind, the implications for helping other children with brain damage from near drowning is certainly promising.