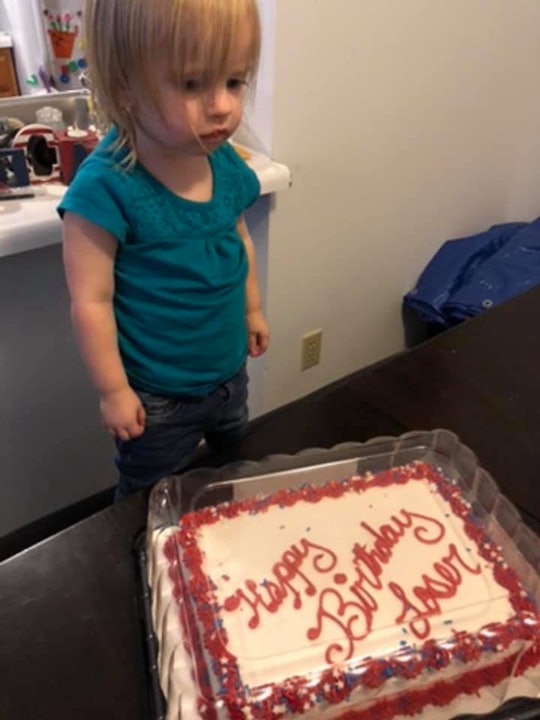 The Story Behind This Toddler's "Loser" Birthday Cake Is... Hilarious

Birthdays only come once a year, so it's only natural that new parents would want to celebrate in the most memorable ways possible. One Missouri mom sure got what she was looking for when it came to making memories — but not in the way you might think. Now, toddler's "loser" birthday cake is going viral and you won't be able to keep a straight face.

In preparation for her daughter, Elizabeth's, second birthday, Melin Jones headed to her local Walmart and ordered a sheet cake with the request that it would read, "Happy Birthday Lizard!" Lizard is her child's nickname, but apparently that's not what the woman behind the counter heard. And thus the "Happy Birthday Loser!" cake was born, Jones told Romper.

A few hours after Jones discovered the mistake she headed back down to Walmart to get a replacement, but not before she took the most amazing photo to send to her husband and alert him of the mistake, according to People.

Young Elizabeth can be seen standing next to her white, red and sprinkled loser cake, looking a bit disheveled. But not to worry, "Lizard" obviously can't read... so she had no clue as to what was going down on her birthday cake. Jones told Romper she plans on telling Elizabeth the hilarious story when she's old enough to appreciate the humor, which makes sense.

"I was shocked at first but then practically came apart laughing so hard," Jones told Romper while discussing the cake incident. "I didn’t want to say anything to Walmart because having worked with the public my whole life, I know what it’s liked to be blamed for a customers mistake and I certainly made the mistake of not checking the cake before I left."

Later that night, Jones and her husband sat and ate most of the loser cake together in between laughs thanks to the sheer comedy of the whole situation, she shared. Thankfully, the family ate a new cake at Elizabeth's birthday celebration the next day.

"It's funny now, but at the time I was mad!" the mom explained in a Facebook post.

So, why are we just hearing about this? Jones originally posted about the cake last year, but took it down quickly as not to get the Walmart employee in trouble.

Recently, she posted the image on a Facebook page called Sad Sales, Stolen Goods, and Sketchy Services Hall of Shame and the cake went viral from there.

This isn't the first cake mix up consumers have seen in recent weeks. According to USA Today, a Georgia woman asked a local Dairy Queen employee to create a Moana themed cake for her daughter. What she received instead was a marijuana themed cake, complete with a green My Little Pony with a Mary Jane leaf on her back side. Only in this case, the employee was fired after the mother complained.

This isn't the first or last birthday cake mixup that parents will face. The Jones' made the best of a weird situation, and if anything they have one very funny story to tell at parties. Happy birthday, Lizard!