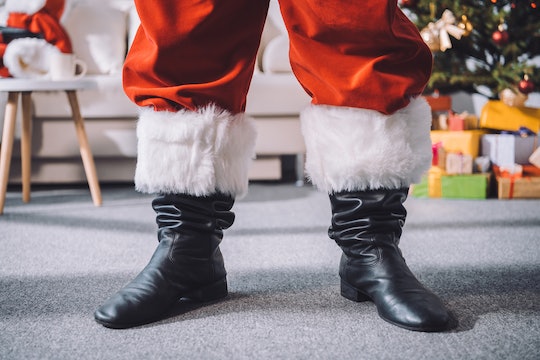 In the middle of the wrapping gifts, parking at malls, waiting in lines and juggling holiday parties that are mysteriously all on one night, it's easy to get Grinch-y. Luckily, this touching story of a kid born blind "seeing" Santa will make the crankiest of parents believe in holiday magic again.

According to USA Today, the whole thing started when Misty Wolf, a mom from Euless, Texas, took her son, Matthew, 6, who was born blind and has been diagnosed with autism, to visit with Santa. As KFOR.com, Oklahoma City's NBC affiliate, reported, Wolf set out to the visit in Fort Worth, Texas, with some trepidation.

You see, as Wolf told USA Today, previous attempts to visit with Father Christmas hadn't gone so well, either because the line was too long and Matthew got impatient, or because once they actually made it to the front, her son refused to engage with Santa.

But luckily, Wolf tried again earlier this month... and was gifted with a very understanding Santa, the paper noted. "I whispered to Santa 'he is blind and autistic and is very interested in Santa,'" Wolf shared in a Facebook post about the experience that has since gone viral, having now been shared over 105,000 times.

“He said 'say no more' and immediately got down on the floor to greet my little man. He talked to Matthew for a long time. Let him feel all over him. Told him to pull his beard, feel his hat ... He asked Matthew if he wanted to feel anything and Matthew said 'your eyes that twinkle' (from the poem ‘twas the night before Christmas) so santa let him touch all over his eyes for as long as Matthew wanted."

Wolf added to USA Today she purposely had not told her son where they were going this time, in order to dispel any anxiety. Also, when they got there, there was no line to make Matthew fidgety. "That's a blessing in itself," Wolf added to USA Today. But with a pro like this particular Kris Kringle, she needn't have worried.

"He immediately got up and knelt down on his level and that's what makes it so great. He didn't grab his arm," Wolf added. "He knew what he was doing. He said, 'You're going to feel my jacket. You're going to feel my beard.' He was so gracious and just guided Matthew everywhere so Matthew didn't get scared. There was just immediate trust in him and Matthew doesn't have that with anybody."

Best of all? This Santa even let Matthew felt a "real" reindeer by guiding the boy over to pet a taxidermy reindeer that had been out nearby. "It was great. My heart was full seeing Matthew so interested," his mom recounted on her Facebook post.

Possibly the biggest highlight of all for this mom of two? This magical Santa got Matthew and his 20-month-old sibling to pose for a photo. "I was just waiting for the meltdown at that point and as soon as he said yes, my jaw just dropped," Wolf told KFOR. "His sister gave the Grinch face, but this time around Matthew was actually looking at the camera and head up and everything. I need Santa in my life for family pictures."

Wolf noted that those precious moments getting to really "see" the spirit of Santa and Christmastime seem to have stuck with her child.

This is such a beautiful story. But if you don't have a child who might need an experience like this one, you might not have given much thought to how tough a traditional Santa visit can be for some families. Luckily, there are special "sensory" Santa experiences popping up all over the country to address just such a need, which is so important.

The grumpiness that erupts when, say, you can't find that Michael's coupon for snowman cookie cutters anywhere in your minivan is just a passing thing. The real magic of the holidays is the simple, touching stories like Matthew's. Wishing him and his family the happiest of holidays!