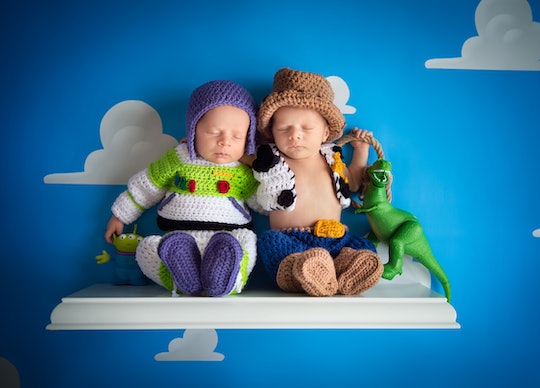 There are a few things in life that I never grow tired of: Sleeping in, coffee, and newborn photos. The first two are a given, considering I have four children ages 7 and younger. And I suppose the third one is a no-brainer as well because babies. But especially in the past decade or so, I've loved the creativity and effort that often goes into photographing brand new babies. The rainbow babies decked out in all the colors, the babies conceived through IVF surrounded by fertility treatment needles, all of the adorable themes, costumes, and more — I can't get enough! And this Toy Story newborn photoshoot featuring Buzz and Woody will make you swoon.

If you have children — or even if you're just a longtime fan of the series — then you've probably already seen Toy Story 4 on the big screen. The highly-anticipated fourth installment hit theaters on June 21 — smashing the opening record for an animated movie with $238 million, Deadline reported. So it's not exactly surprising that Toy Story was the theme of a recent newborn photoshoot. It is, however, freaking adorable. Because twin newborns + Toy Story 4 = exploding ovaries.

Photographer Karen Hourscht of Belly Beautiful Portraits is the woman behind the lens of the photo below. The shot features twin brothers dressed as Buzz Lightyear and Woody sitting on a toy shelf with their good pal, Rex. (I love that she even included the cloud "wallpaper.") Take a look for yourself and prepare to swoon.

Besides "awwwww!" one of my first thoughts after seeing the photo was, "OMG, where did they get those crocheted Woody and Buzz costumes?!" Because like the sleeping angels who are wearing them, they are perfection. If you're looking to take some Toy Story photos with your little one, the outfits are actually made by The Yarn Mermaid, according to PopSugar.

Hourscht shared the photo on her business' Instagram and Facebook accounts — and the reactions were probably similar to yours.

One Instagram user wrote, "Oh my freaking heaven that is the cutest of all."

Another person commented, "Cutest toys this side of sunnybrook!! ❤️❤️👶🏻👶🏻 Thank you for this!!"

But wait, that isn't all.

Here's another shot with Sheriff Woody snuggling up to Bullseye and surrounded by other characters from the beloved series. (I'm seriously loving all the details!)

"We were very excited about Toy Story 4 coming out and we have lots of clients that like Disney so it was a perfect opportunity to capture these precious photos," photographer Karen Hourscht tells Romper. "The client who had twin baby boys wanted Toy Story and since we already had Woody, we asked The Yarn Mermaid to make us a Buzz outfit as well."

"The response to the photos has been amazing, everyone is loving them!" she added. "We now have a lot of clients requesting Toy Story, we have more followers on instagram, and it was so much fun!"

As Red Tricycle reported, Hourscht has nailed many other photo session themes as well. Like this Harry-Potter-inspired newborn photo, for example.

Or these Frozen newborn pictures.

If you ask me, photographers are totally killing it lately when it comes to babies and rocking a theme. Like this epic Starbucks cake smash. To be honest, I've never been more jealous of a 1-year-old.

Who knows? Maybe by the time the Toy Story twins are grown, they'll be having a similar newborn photoshoot done for their own children — only in celebration of Toy Story 10!