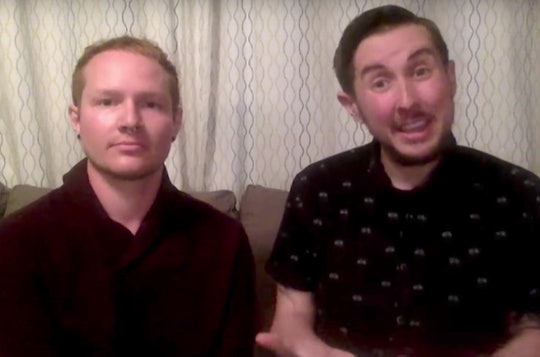 This Trans Dad Just Gave Birth To His Son

One vibrant young Portland family just gained its newest member after this trans dad gave birth to his son. Trystan Reese is far from the first transgender man to bring a baby into the world, but he and his husband, Biff Chaplow, are certainly among the most public faces of a situation that may be unfamiliar to some — and the world is a better place for it. Little Leo Murray Chaplow has been proving that he's as happy and healthy as you'd expect a baby with such loving parents to be. Since his birth July 14, Leo "eats like a champ, sleeps well, and gives us lots of cuddles," the two ecstatic dads recently told CNN.

Leo is the first child that Reese and Chaplow have welcomed together, but they both earned the title of "Dad" way back in 2011. That's when they gained custody of (and, later, adopted) Chaplow's niece, 7-year-old Hailey, and nephew, 9-year-old Riley. And now that Leo is finally here, the whole family couldn't be happier, as Reese told People magazine:

It feels like an incredible relief for him to finally be here. We've waited so long to meet him, and worked so hard to bring him into this world, that it's just a joy to be able to look at his face and hold his tiny hand and actually see him.

Although Reese did endure one miscarriage last year before carrying the pregnancy with Leo to term, his journey to giving birth to a happy baby wasn't much different than that of a women who had previously been on a hormonal birth control — at least from a biological standpoint. According to The Washington Post, the 34-year-old began taking hormones around the age of 20 as part of his transition, and was able to conceive about five months after discontinuing the testosterone. Finding out that he was pregnant, he told the Post, brought on "equal parts elation and fear," which are feelings that, honestly, most people who have ever found out that they have another human inside of them can relate to.

Reese and Chaplow have done a lot to demystify the idea of a dad giving birth to his son. And their efforts have helped to show that, while their family is extraordinary in some respects, it's just like anyone else's in so many more ways. They blog about their experiences, detailing the importance of taking your kids to Pride and the challenges of balancing parenthood with a healthy sex life. They also document their family's milestones and adorable moments on their social media accounts.

In a recent Facebook video, Reese shared some illuminating thoughts about his body. "I'm OK being a man who has a uterus and has the capacity and capability of carrying a baby," he said. "I don't feel like it makes me any less of a man. I just happen to be a man who is able to carry a baby."

Chaplow and Reese's daughter, Hailey, is very enthusiastic about her new baby brother, and is excited about feeding him and even trying to change his diaper, he told People. Riley, on the other hand, is looking forward to the day when Leo will be a little older so they can play together. And one thing's for sure: Reese and Chaplow's many fans are also excited to see the baby grow up, and to experience the joys of parenting right alongside these two dads.