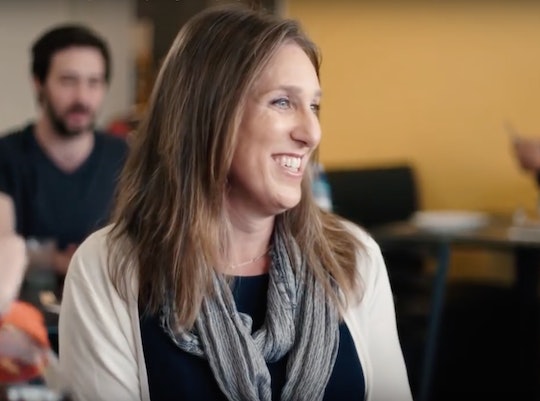 The Republican National Convention is almost here and is sure to be one of the most interesting ones that U.S. citizens have seen in a very long time. From a non-politician leading the convention's nominations (ahem, Donald Trump) to the roster of colorful speakers, to the issues that no one can agree on, it's bound to be a certifiable circus. Compounding those things, hot-button topics like gun rights, immigration, and transgender bathroom rights are almost certain to come up, which is why I'm so happy that this transgender bathroom rights ad will play during the Republican Convention coverage.

With the ad scoring airtime during the convention's main festivities, the voters and politicians alike will be forced to confront the controversial topic head on and, if not address, at least see the problem with limiting the rights of the transgender community, which North Carolina's "bathroom bill" most certainly does. The ad — which will air on Fox News on July 21 — will be a great way for transgender activists to reach a wider audience of conservative viewers and hopefully trigger some sort of positive reaction, or at least get the ball rolling.

"The night Donald Trump accepts the nomination, America will be watching," Mara Kiesling from the National Center for Transgender Equality, told Time last week. "And the people we really need to reach will be watching Fox News."

The ad itself features a transgender woman attempting to use the restroom in a public place; When the owner sees her going into the bathroom, he stops her and directs her to the men's room, opening the door to two men waiting inside. Both men look at the woman strangely, making her uncomfortable, but the business owner insists. Finally, two women come to her aid, waving off the business owner, and despite his protests, they walk her into the bathroom.

"Updating the laws to protect gay and transgender people from discrimination won't change [the fact that they face discrimination regularly]," the woman, Alaina Kupe, says in a voiceover, "but it would help to ensure that people like me aren't mistreated when we need to do something as basic as using the restroom."

In the latest draft of the Republican Party platform (just in time for the Republican National Convention), it appears that the Republican Party officials are still as conservative as ever. This newest draft includes phrases like children "deserve a married mom and dad" (even though in 2016 one-third of American marriages will end in divorce) and refers to "natural marriage" as a marriage between a man and a woman. The platform also condemns Obama's allowance of transgender children to use the bathroom of their choosing at school.

While this language is horribly limiting, there is still some hope that this ad could make progress with conservative voters and see from the perspective of the transgender community. Luckily, transgender convention attendees won't have to worry about the "bathroom police" while they attend the convention in Cleveland, Ohio. According to The Advocate, the Cleveland City Council unanimously agreed to update an anti-discriminatory ordinance "that will guarantee transgender people can access facilities that will correspond with their gender identity." For transgender people like Caitlyn Jenner, who will be attending the convention, this news is promising.

While I'm not saying that conservative voters should have to change their mind on the issues they believe in, I do believe that this ad could provide great exposure to issues like these. Even allowing an outlet through which conservative voters may learn to empathize with the transgender community is a big step, no matter how trivial it may seem.