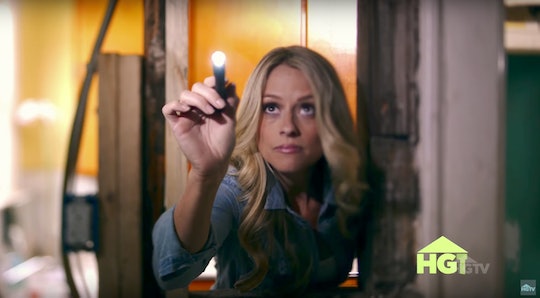 Moms decide how long to nurse their babies, and whether to do so at all, for so many different reasons. For some, work obligations or physical challenges could lead to introducing a bottle immediately or after a few months; in other cases, moms breastfeed for an extended period because it works for them and their babies. For Rehab Addict star Nicole Curtis and her 2 1/2-year-old son, that's definitely the case — and she said in a recent interview that she'll breastfeed her son until he's ready to stop. Even though breastfeeding is as natural as breathing, that can be a difficult choice to make as pretty much any mom who's ever breastfed will tell you. Mainly because society is pretty squeamish about breastfeeding, especially when it's done in public or with a child who's no longer an infant.

But Curtis has no plans of letting the criticism, which she recently said she encounters a lot, deterring her from doing what she feels is best for little Harper. "I keep saying, it’s not like he's 7 or 8 — he's still a baby," she told People magazine at a photoshoot, as the toddler himself reportedly reached for her in order to nurse. And even if Harper were older, his house-flipping mom wouldn't be so quick to cut him off, she told the publication:

Every single day I have to weather criticism about how my child is too old to breastfeed. But when he weans, it’s going to be his decision. I truly believe it's the child’s choice.

Curtis is a particularly outspoken proponent of breastfeeding moms' rights because her ongoing custody battle with Harper's dad, Shane Maguire, has disrupted her own breastfeeding routine. According to TODAY, Maguire was granted joint custody of the little boy in July 2016, before Harper was about 6 months old and had never eaten anything other than his mom's milk. Because she physically can't pump the amount of milk that Harper drinks, she is allowed to see him once a day when he is with his dad in order to breastfeed.

That doesn't sound like the most comfortable or convenient arrangement for anyone (except perhaps Harper himself), but Curtis is determined to allow him to nurse as long as he wants to, as she shared with Country Living Magazine back in April:

Anyone who's ever breastfed [knows] the mother does not make the decision there. I'm going to walk through the airport and my child is going to whip my breast out of my shirt at any point because that's what he wants to do.

In a Facebook post celebrating World Breastfeeding Week in August 2016, Curtis argued that breastfeeding babies should not be separated from their mothers. And a year after Maguire gained partial custody of Harper, Curtis tweeted that she was "still crusading" for nursing babies' rights when it comes to family law.

The American Academy of Pediatrics officially supports breastfeeding for up to 1 year old and beyond, according to KellyMom.com, while the World Health Organization supports it for children aged 2 years and older. (Babies also require other foods to get adequate nutrition as they get older.)

Of course, there's absolutely no reason for moms who don't or can't breastfeed their babies for these amounts of time to feel guilty. But it is commendable that Curtis is sticking to her conviction to have her son nurse until he naturally weans, despite any criticism she might face.