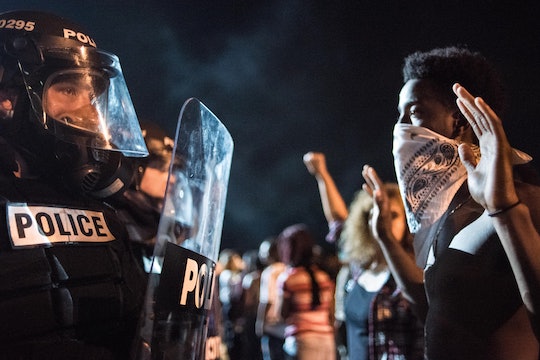 On Tuesday, yet another black life was lost at the hands of police. Keith Lamont Scott, a 43-year-old father, was shot and killed by a police officer in Charlotte, North Carolina, on Tuesday. This, sadly, was just days after Terence Crutcher, a 40-year-old father of four, was fatally shot on his way home from a class at Tulsa Community College in Oklahoma. These two black men tragically lost their lives and their families are left to mourn. But many people continue to ask, and demand to know, why? What do continued incidents like these say about the systemic issues with police violence in America? These are just a few of the questions people are asking and that black people continue to face on a daily basis. And this tweet about Scott and Crutcher shows exactly why there's a need to acknowledge and address America's existent racial disparities in police violence.

Last week, the day after an unarmed Crutcher was shot and killed by Tulsa police officer, an explosion rocked the Chelsea neighborhood of Manhattan the night following. The bomb injured 29 people, and the suspect, Ahmad Khan Rahami, is suspected to also be involved with a bomb that exploded in Seaside Park, New Jersey, earlier that morning, and to bombs that were discovered in Elizabeth, New Jersey, on Sunday night. Rahami is now in custody after a shootout with police in Linden, New Jersey. Rahami was not only armed, but reportedly opened fire on police officers and struck an officer in the chest. What's interesting about the entire incident is that Rahami left the scene alive.

As Twitter user @PC_Ace87 pointed out, police were able to deescalate the situation — a shootout with a man suspected to be responsible for multiple bomb explosions — without taking his life.

"Police had a shootout w/Ahmad Khan Rahami & took him alive, so you wonder how #KeithLamontScott & Terence [Crutcher] type situations occur," he wrote.

Crutcher was unarmed, and there are conflicting reports on whether Scott had a gun or book on him at the time of his shooting death.

As The Atlantic reported, Charlotte police claimed Scott was armed with a gun, but a woman claiming to be Scott's daughter posted a video on Facebook Live saying Scott was unarmed, and was in fact reading a book inside his car when he was shot. Officer Brentley Vinson, who is also black, fatally shot Scott. Below is a partial statement from Charlotte-Mecklenburg Police Chief Kerr Putney about the incident:

In spite of these verbal commands, Mr. Scott exited the vehicle still armed with the handgun as officers continued to tell him to drop his weapon. The subject posed an imminent deadly threat to the officers and Officer Brentley Vinson subsequently fired his weapon striking the subject. The officers immediately requested Medic and began performing CPR. Medic responded to the scene and transported the subject to Carolinas Medical Center where he was pronounced deceased. Detectives recovered the firearm the subject was holding at the time of the shooting in close proximity to the subject. Per department protocol, the Officer Vinson will be placed on Administrative Leave.

But what history and statistics show, is that whether or not black people are armed, black people still face disparities in being the targets of police force, and are still disproportionately killed by police.

Dylan Roof, a white man charged with nine counts of murder and three counts of attempted murder for the horrific killings of nine black church-goers in Charleston was arrested and taken in custody alive – not to mention with a meal from Burger King.

Police killings and the loss of black lives involves a lot of historic, and inherently racist police practices to unpack. Discussions on racial profiling, and implicit racial biases are important. But at the very least, the racial disproportion of deescalating police encounters also continues to be a necessary conversation. Black lives continue to matter.