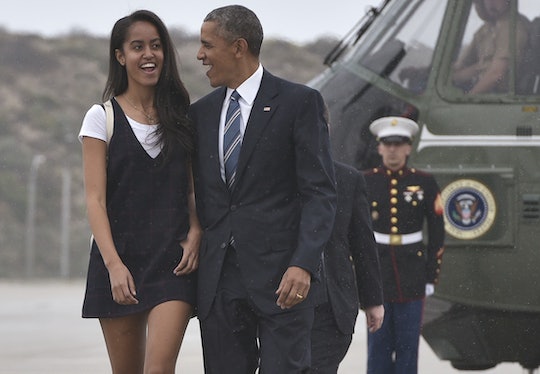 It's official — after a well-documented college application process, the White House announced Sunday that Malia Obama is going to Harvard! The super-cool first daughter is making the people of Cambridge wait a little bit longer to bask in her presence, of course: Before she enrolls, she's taking a gap year, so she won't be starting at Harvard until 2017. Already the move has drawn criticism and invoked a flurry of attention on social media — but this one tweet about Malia's Harvard acceptance proves exactly why we need to be talking about it.

Malia's decision makes a lot of sense. Over the past year, she's toured almost every Ivy League school, but at Harvard, she'll be following in some particularly impressive footsteps. Both of her parents attended law school there, and 22 other presidential children have gotten Harvard degrees, although Malia will be the first one in recent years to do so. The gap year seems like a great idea too. This is her father's last year in the White House, so that's already a huge transition. And after growing up before our eyes, it could be really healthy for her to take a year to figure out who she is, away from the spotlight of the White House or the containment of a college campus.

Immediately following the White House's statement, social media blew up with congratulations for her, and she started trending on Twitter. While most of the reaction was deservedly positive, the inevitable Internet jerks interjected with mean-spirited comments wondering why her college plans were news. But there are a million reasons we should be thrilled for Malia, and the following Tweet captures one very important one:

Malia's mother, first lady Michelle Obama, has talked before about the particular challenges that black girls face, most memorably in her speech at the Black Girls Rock! Awards in 2015, where she detailed her own struggles with the "voices that tell you that you’re not good enough, that you have to look a certain way, act a certain way; that if you speak up, you’re too loud; if you step up to lead, you’re being bossy."

The #BlackGirlsAreMagic hashtag was coined in 2013 by CaShawn Thompson to highlight the achievements of black girls and women in a world that isn't always receptive to them. The Huffington Post, in nailing down a definition of Black Girl Magic, called it "a term used to illustrate the universal awesomeness of black women" in a society that might otherwise ignore them. "It’s about celebrating anything we deem particularly dope, inspiring, or mind-blowing about ourselves," wrote senior fashion editor Julee Wilson. And Sunday's news is certainly worth celebrating, if only to show other young girls that they too are capable of great things, no matter what the current social climate might tell them.

Malia has always been a great role model and a hard worker (just check out this adorable schoolwork anecdote her dad, Barack Obama, told about her in 2009), and her college plans kick her into an extra-inspirational gear. So many congratulations to Malia!

Now, we all just need to wait to find out what she's going to do with that gap year. It'll undoubtedly be awesome.