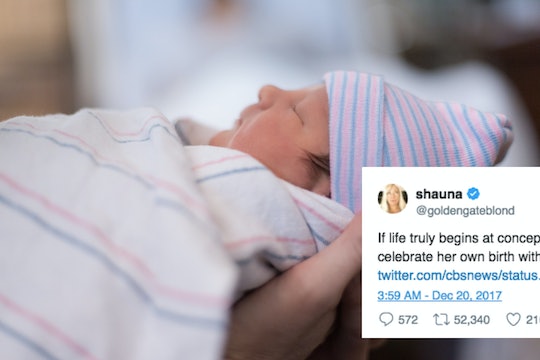 Earlier this week, a record-setting birth was announced by the the National Embryo Donation Center: A woman has delivered a baby who came from an embryo that was frozen for more than 24 years. (Yes, really!) Even more fascinating is the woman who delivered the baby is a 26-year-old from Tennessee named Tina Gibson. Simple math tells us this baby girl's mom was only 1 year old when the baby's biological parents had the embryo cryopreserved. Mind equals blown. While the story is proof of how amazing science truly is, this tweet about the 24-year-old frozen embryo baby makes an important point about abortion.

As a point of reference, the longest-ever frozen embryo to come to birth before this had been frozen for 20 years, CNN reported. But thanks to Emma Wren Gibson — who was born on Nov. 25, as People reported on Tuesday — that record is history. The embryo from which she originated was cryopreserved on Oct. 14, 1992 and thawed on March 13, 2017, The Mirror reported. "Do you realize I'm only 25?" Gibson said at the time of the embryo transfer, according to CNN. "This embryo and I could have been best friends." Isn't that wild to think about?

News of a baby born from an embryo that had been frozen for 24 years was understandably difficult for Twitter to wrap its mind around. "Is anyone else just a little bit freaked out by this story? The child, who looks adorable (and congratulations to her family!!!) was kind born 24 years old!" one person tweeted. To which someone cleverly responded, "So... since life begins at conception, should this infant be allowed to buy liquor now?" LOL. But seriously, what do pro-lifers think about this?

Others were quick to point out the same reality to those who believe life begins at conception. One tweet in particular has managed to attract a significant amount of attention. "If life truly beings at conception then this baby can legally celebrate her own birth with a martini," @GoldenGateBlond wrote. (So this!)

Naturally, this sparked opinions of all sorts, some of the most entertaining being a debate over whether it was an egg, an embryo, or a fetus that was actually frozen. Because apparently, people have no idea of the difference between these three things.

Yet another Twitter user pointed out that many pro-lifers may not actually consider Emma to be 24 years old because her creation doesn't fit their definition of "conception."

Here's my take on the matter: I will never understand how a clump of cells can be equated to a human child. And I really can't understand how an embryo or a fetus can be deemed more important than the life of the living, breathing human being who is hosting it — and why the decisions a woman makes for her own life, her own body is even up for debate or regulation. It never ceases to blow my mind.

To those who believe life begins at conception, I'd like to direct to a series of tweets by sci-fi author Patrick Tomlinson, which went viral last month. "You're in a fertility clinic. Why isn't important," Tomlinson tweeted, Salon reported. "The fire alarm goes off. You run for the exit. As you run down this hallway, you hear a child screaming from behind a door. You throw open the door and find a five-year-old crying for help." He continued:

They're in one corner of the room. In the other corner, you spot a frozen container labeled "1000 Viable Human Embryos." The smoke is rising. You start to choke. You know you can grab one or the other, but not both before you succumb to smoke inhalation and die, saving no one. Do you A) save the child, or B) save the thousand embryos? There is no "C." "C" means you all die. In a decade of arguing with anti-abortion people about the definition of human life, I have never gotten a single straight A or B answer to this question. And I never will.

Another thing I've always had a difficult time understanding about anti-abortion proponents — who believe life begins at conception and consider abortion at any point to be "murder" — is how they can honestly consider themselves "pro-life" when after a woman gives birth, they're against everything that would help support that child. It's like ... "No, we won't cover birth control. But if you get pregnant, then you can't get an abortion because it's murder — even if you can't afford to raise a child, or your own life is at risk. And no, after that child is born you don't deserve support in the form of financial assistance, food, or paid leave from work. Oh, and don't get pregnant again, you freeloader." What. The. Actual. F*ck.

As Allen Levinovitz argues in a Slate article from January, "To anyone looking in from the outside, the [pro-life] movement seems to be more about making public declarations of pious conservatism than advocating for life." He continues:

It is, at heart, a religious movement, which explains the absence of contraception and sex education from the platform. It is also a politically conservative movement, which values small government more than the souls of unborn children and seeks to do little for them once they are born.