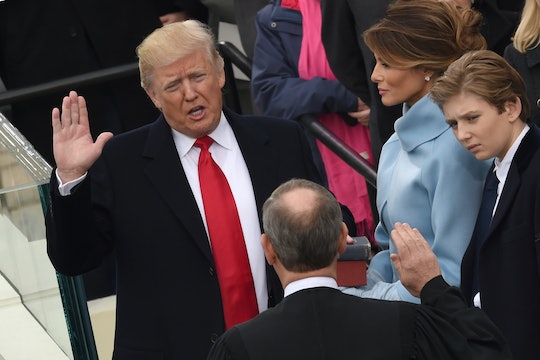 Now that Donald J. Trump has just taken the presidential oath of office, the official transition from former President Barack Obama to now President Trump has begun. In the White House, movers are already swapping out furniture and belongings, while online, the official presidential Twitter account, @POTUS, appears to have been handed over to Trump's administration. And there's one tweet about Trump's POTUS Twitter account that is all of us right now: Just a simple screenshot that reads, "@POTUS hasn't tweeted yet."

Considering just how much Trump loves his Twitter account, it's a refreshing moment of social media silence that I'm sure will be broken just as soon as some staffer gives Trump the POTUS Twitter account password. For now, it's blissfully quiet on Trump's official Twitter front as president. Even his infamous personal Twitter account seems to be mostly posts pushed from his Facebook page and quotes from his inauguration speech — nary a "low energy" or "sad" to be found at the moment. To be fair, Trump has a busy day of inauguration events ahead of him, and maybe — just maybe – the work of being, oh, I dunno, the leader of the free world might take up some his time rather than tweeting about SNL at 3 in the morning.

The notion of a sitting president even using social media at all is still a relatively new concept, as ubiquitous as Twitter and Facebook are right now. When Obama took office, Twitter was still only two years old. Two! Vine, Twitter's weird short video little cousin, lived an entire — if brief — life during Obama's entire presidency. But President Trump, with his over 20 million Twitter followers on his personal Twitter account, has been inaugurated into a whole new era of communication with the American people. He certainly hasn't been shy about making policy comments via his Twitter account even after he was elected, and it remains to be seen if those types of tweets will transition to the POTUS Twitter account.

But until then... Let's just take a moment to savor the quiet, maybe take a deep breath or two? In and out. In and out.

OK, now, I'm not trying to break this nice calming meditative groove right now or anything, but um, yeah — so, Trump is president and he's about to take over the official POTUS Twitter account any moment now.