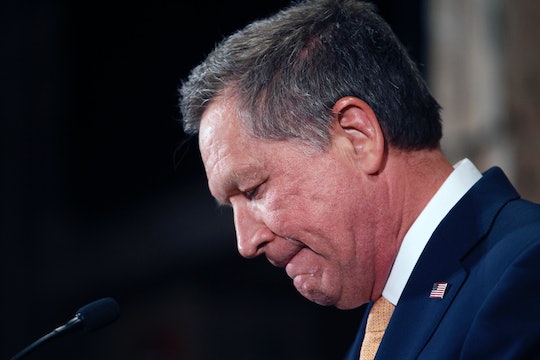 On Tuesday, Ohio politicians passed a bill banning abortions after a fetus' heartbeat can be detected that will take effect next year if signed by Ohio Gov. John Kasich in the next 10 days. The "heartbeat bill" is extreme because it leaves no time for women to have a choice if they don't want to become mothers, and for obvious reasons, reactions to the bill have been strong. This tweet shows how the Ohio "heartbeat bill" essentially bans abortions.

A heartbeat can be detected from the fetus by the sixth week of pregnancy, according to the American Congress of Obstetricians and Gynecologists. The way pregnancy is calculated includes a period of time before you were actually pregnant; doctors count from a woman's last menstrual period, according to the American Pregnancy Association. A woman's first doctor's visit typically occurs around eight weeks after her last period.

Think about it. The window to have an abortion would end before a woman could even go to the doctor to confirm her pregnancy.

What's worse? Most women realize they're pregnant four to seven weeks into the pregnancy. So, for a woman who starts to suspect she may be pregnant six weeks in and isn't sure if she wants to become a mother, this new bill will have already made the choice for her.

Many studies have shown that women who become pregnant unintentionally receive prenatal care later than women who planned their pregnancies. So a woman who becomes pregnant accidentally may not go to the doctor until, say, the ninth or 10th week. In Ohio, a whopping 46 percent of pregnancies are unplanned, according to the Ohio Department of Health.

Even if a woman did know for sure that she's pregnant, current Ohio laws require women to visit their doctors twice before they can have an abortion. A woman also may not have an abortion until 24 hours after visiting the doctor — which may not seem like a long time, but every day counts if a bill like this passes.

On Twitter, Jessica Hische, an illustrator, and type designer, created a graphic timeline of pregnancy that perfectly captures how limiting this law would be:

Although there are exceptions to the six-week rule if the life of the mother is in danger, the bill is also extremely limiting because it contains no exceptions for rape of incest, NPR reported.

In a statement made exclusively to Romper, the National Organization for Women's president, Terry O'Neill, wrote:

Ohio's unconstitutional attempt to ban abortion care will--without a doubt--put women's lives at risk. It is morally reprehensible. Abortion is a necessary part of routine reproductive healthcare; criminalizing it will only drive patients to seek care outside the safety of a doctor's office. NOW calls on Governor Kasich to do the right thing and veto this ugly, harmful bill.

Poor women are the most vulnerable if this bill becomes law, because they are the most likely to seek abortions.

The bill will become law unless Ohio Gov. John Kasich vetoes it within the next 10 days, NPR reported. Thinking about that is extremely scary, since Kasich has signed 17 anti-abortion bills into law since 2011, The Washington Post reports.

“Ohio has become, over the years — over decades really — a testing ground for anti-abortion policies and restrictions on family planning services,” Elizabeth Nash, a senior policy analyst at the Guttmacher Institute, told Politico back when Kasich was campaigning for president. “It really is one of the most hostile places in the country.”

Most states allow abortions until the 20th week or until the fetus is viable, meaning it can live outside of the womb; viability, according to the Supreme Court and medical science, should be determined by doctors because it can differ on a case-by-case basis.

“It’s unconscionable that politicians in Ohio are trying to sneakily pass clearly unconstitutional abortion bans in the final days of their session,” Nancy Northup, the CEO of the Center for Reproductive Rights, told Salon, in reference to the fact that the ban was attached to a child abuse bill.

Sneaky or not, this isn't the first time a state has created an abortion ban at six weeks. Courts have overturned similar laws before, notably in North Dakota. But the bill poses too great of a risk to chance that it will be overturned.