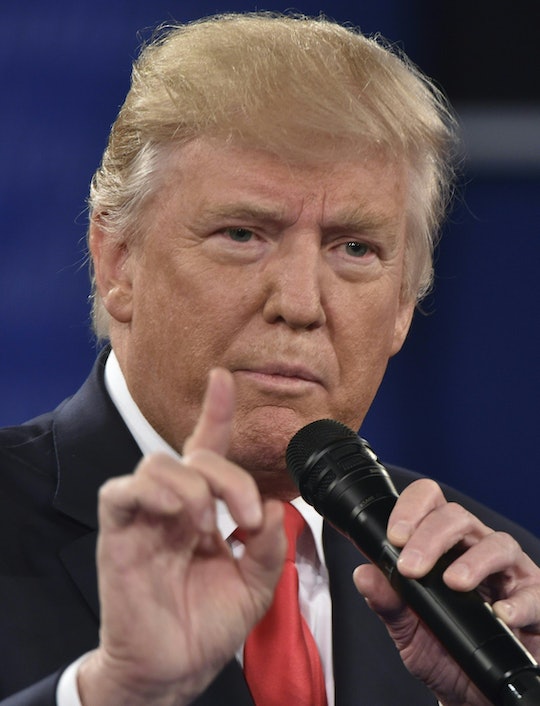 It looks like civilized political discourse in the United States is a thing of the past. During Sunday's second presidential debate, Donald Trump once again threatened Hillary Clinton, not with violence (which is a relief), but with imprisonment. The Republican nominee vowed to appoint a special prosecutor to investigate the former Secretary of State if he was elected president, and told Clinton, "You'd be in jail." This is no idle threat, though, as viewers quickly pointed out — threatening a political rival with imprisonment is a move more in line with what a dictator would do. And that's what makes it so terrifying.

This isn't the first time that Trump has used intimidating language with regards to Clinton. At a campaign rally in August, Trump (falsely) claimed that if elected, Clinton would abolish the Second Amendment, then mused, "If she gets to pick her judges, nothing you can do, folks. Although the Second Amendment people... maybe there is, I don’t know." To many, this sounded like a suggestion that "Second Amendment people," or gun rights proponents, use said guns to assassinate Clinton. Trump later claimed that he meant that they should vote against Clinton, but she wouldn't be able to appoint a Supreme Court justice unless she'd already been elected president, so the explanation doesn't make a ton of sense.

As much as Trump likes to tout the Second Amendment, he rather seems to enjoy the First Amendment best, often saying things that one wouldn't dare say in other countries. Just last Friday, an audio recording of Trump emerged where he gleefully bragged about the ease with which a man of his fame could commit sexual assault. (Trump later apologized, saying, “Anyone who knows me knows these words don’t reflect who I am," but dismissed his words as "locker room talk" during the debate.) And his campaign rhetoric has veered into the territory of inciting violence – in fact, the Cumberland County sheriff’s department in North Carolina at one point considered charging Trump with inciting a riot, although the charges ultimately didn't happen.

But for better or for worse, the people of the United States are allowed to say almost anything they wish without fear of repercussion. Not so in countries like Russia and North Korea, where Putin and Kim rule with iron fists, jailing their critics or executing cabinet members for perceived slights against their leaders. With Trump, can we expect an America where Trump can say and do and grab whatever he sees fit, but anyone who dares to disrespect him – say, by running for president against him – could face jail time? Even, ostensibly, for a "crime" for which Clinton has already been investigated and cleared of all charges? That would not be making America great; that would be making it a dictatorship.