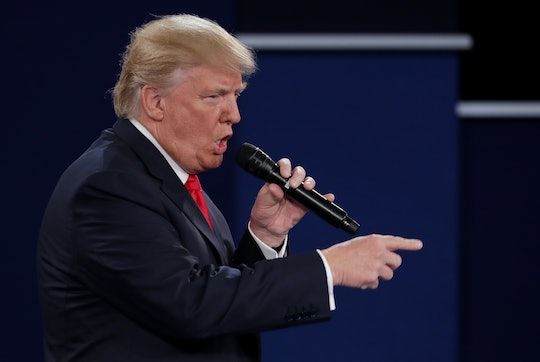 Right from the get-go of the second presidential debate, it was clear that Republican presidential nominee Donald Trump had a game plan. His plan was this: blame Democratic presidential nominee Hillary Clinton for her husband's alleged misconduct. And in 140 characters or less, one Twitter user was able to sum up how off Trump's second debate strategy is. A woman is not her husband. Hillary Clinton is not Bill Clinton, and she should not be persecuted for his sins.

Donald Trump is not the only who is eager to place blame for a man's misdeeds on his wife. It is, unfortunately, an all too common occurrence. It's become such a political cliche that an entire TV show was created around the premise. Shout out to Alicia Florrick, who would definitely be #withher. Just as Alicia Florrick was more than the husband who was caught cheating on her, so is Hillary Clinton. It's time to stop blaming the Democratic nominee in the court of public opinion for crimes she did not commit. That was the point Twitter user @dagraffman underscored when the account tweeted:

In a New York Times editorial titled "Donald Trump Drags Bill Clinton's Baggage Out", the editorial board swiftly condemned Trump for bringing the former president's extramarital affairs into the election. In the article's next breath, however, it condemned Hillary for standing by her husband's side throughout the series of scandals, stating that "for decades Mrs. Clinton helped protect her husband's political career, and hers, from the taint of his sexual misbehavior, as evidenced by the Clinton team's attacks on the character of women linked to Mr. Clinton." Salon astutely points out that this article makes it seem like Bill's infidelity is forgivable when Hillary's loyalty to her her husband and family is not. It presents an unfortunately common and sexist double standard.

The fact that Trump so aggressively went after Clinton and her marriage in the second presidential debate is a classic example of his hypocrisy and personal sexism. Trump has stepped outside his own marriages, most famously when he allegedly had an affair with Marla Maples while he was still married to his first wife. Ivana Trump, the first of Donald's three wives, also accused her ex husband of raping her. She went on to retract this accusation with a statement to The Daily Beast in 2015, saying "As a woman, I felt violated, as the love and tenderness, which he normally exhibited towards me, was absent. I referred to his as a 'rape,' but I do not want my words to be interpreted in a literal or criminal sense."

Trump went into the second presidential debate primed to blame Hillary for something he has done and she has not. Hillary Clinton is not her husband's public indiscretions. She is not her husband. Period. She is an independent person. She is a woman. She is a lawyer, a public servant, a mother, a daughter, a grandmother, a former U.S. Senator and Secretary of State. And hopefully she will be the next President of The United States. So let's stop blaming her for somebody else's mistakes.