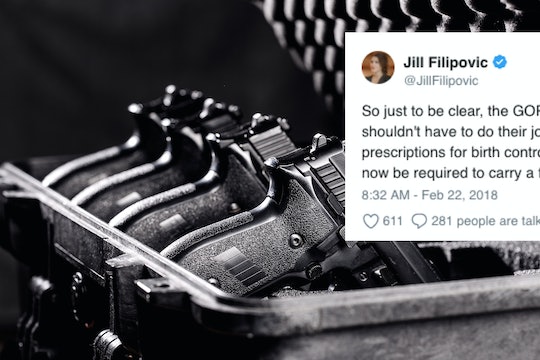 This Tweet Totally Wrecks The GOP's Argument To Give Teachers Guns

In a shockingly rare display of bipartisanship, the left and right united this week in agreement that the mass murder of schoolchildren is bad. Far less surprising: we're nowhere near an agreement on how to solve the problem. The right wing has offered the old "good guy with a gun" myth as a solution to the school shooting epidemic, but with one tweet, the GOP's argument to give teachers guns has been thoroughly ruined. To most thinking people, the idea of arming educators is laughably absurd, but just in case it's not clear why this wouldn't work, writer Jill Filipovic laid it out on Twitter Thursday morning.

Teaching in public schools is a difficult and often thankless job. Educators aren't paid nearly enough, they're often forced to pay for supplies out of their own pockets, and for the last year, they've had to deal with an extraordinarily unqualified Secretary of Education who seems hell-bent on completely destroying the institution of public education. It's not a line of work that people fall into by accident; teachers work for years to earn their degrees so they can make a difference in children's lives, and improve the world one mind at a time. Now, the GOP wants to add armed combat to their list of duties.

So just to be clear, the GOP position is that pharmacists shouldn't have to do their jobs if they object to filling prescriptions for birth control, but a kindergarten teacher should now be required to carry a firearm into her classroom.

To be fair, I'm not a teacher, so I certainly can't speak for all of them. Perhaps there are a few teachers out there who would be happy to trade in their tweed jackets for bandoliers in the name of making our schools safe. But it's not hard to imagine that there's at least an equal amount of educators who would prefer not to carry a deadly weapon during show and tell. Requiring teachers to take on the role of armed guards is not only far outside of their area of expertise, it's bound to go against the belief systems of many of them. And the GOP sure does hate it when people are required to do things they're morally opposed to, don't they?

Recall, if you will, Kim Davis, the born-again county clerk whose love for Jesus prevented her from legally affirming the love of her fellow citizens, which was quite literally the entire point of her job. Or Memories Pizza, the first Indiana business to take advantage of then-Gov. Mike Pence's Religious Freedom Restoration Act when it announced its refusal to cater same-sex weddings. Or the brand-new rule, under Trump's Department of Health and Human Services, that allows medical professionals to refuse to provide birth control, treat transgender patients, or literally anything else they feel icky about.

When 97 percent of Americans are saying "Too many people have guns," according to The Hill's report of a Quinnipiac University poll, and the party in power's solution is "Give more people guns," I think it's fair to say that they're not listening. Just hours after Trump met with school shooting survivors and grieving families whose kids weren't as lucky, he went on his customary early morning Twitter rampage arguing that teachers should have guns (while simultaneously claiming he never said that they should). Having 20 percent of teachers carrying concealed weapons, he insisted, would be a "GREAT DETERRENT!"

The scourge of automatic weapons being used to commit mass murders in public schools won't be solved by turning teachers into soldiers. First of all, just try to wrap your head around the logistics. Would weapons training be voluntary or compulsory? Would special hiring preference be given to teachers willing to carry guns? Would the federal government provide the weapons? Would strapped teachers be strategically stationed in specifically spaced-out classrooms?

To prevent mass shootings, we need fewer guns, not more. In 1996, Australia had a mass shooting, and according to Slate, it took just 12 days for the government to ban semi-automatic weapons. They haven't had one since. It really is that simple.