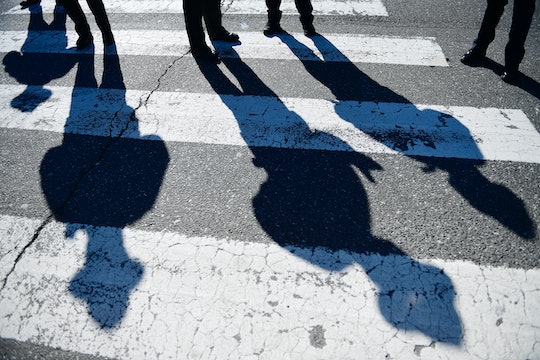 Chances are likely you know a thing or two about how to protect yourself from the sun — even if you don’t always play by the rules. Whether it’s using sunscreen, taking cover under a large beach umbrella, or donning protective clothing to block rays, keeping your skin free from burning and damage that may lead to skin cancer is kind of crucial. And if you haven’t heard of this UV shadow rule, then you may want to keep reading because it’s a good way to keep your summer sun exposure in check.

According to the American Skin Association, The Shadow Rule is a great way to determine when you should avoid the sun. The rule is simple — a short shadow means you should seek shade. What this means is that “the intensity of UV rays is directly related to the angle of the sun or altitude above the horizon,” the website notes. “The shadow rule indirectly determines the sun's altitude by observing the length of a person's shadow during the course of the day. When a person's shadow is shorter than the person is tall, the intensity of the UV rays from the sun is more likely to cause sunburn.”

The Shadow Rule kind of works in conjunction with the idea that you should avoid the sun during peak hours in the sense that they both involve timing. According to the American Cancer Society, you should limit your direct exposure to the sun, especially between 10 a.m. and 4 p.m. That’s because that time window is when UV rays are strongest.

If you are going to be spending time outside, then you’ll want to take some of the protective measures already mentioned — including sunscreen and UPF clothing — to ward off harmful rays.

When it comes to choosing a sunscreen, you’ll want to pick a broad-spectrum sunscreen with an SPF of 30 or higher, noted the American Cancer Society. Make a mental note of the application time and reapply sunscreen at least every two hours, as well as after swimming or sweating.

With that in mind, it’s important to know that just because you see “water resistant” on the label, it does not make sunscreen waterproof. In fact, the American Cancer Society pointed out that no sunscreens are waterproof or “sweatproof.” Which means it’s just another reason to reapply sunscreen after swimming or sweating and toweling off.

Covering up is also important when keeping your skin safe. When you are outside, wear protective clothing, wide-brimmed hats, and sunglasses that block at least 99 percent of UV light.

You might also want to invest in clothing that has built-in UPF to keep your skin safe while in the sun. Shedo Lane makes kids' sun protection shirts — short and long sleeved — with UPF 50+ UV SPF. They also have adult options. Coolibar is another popular brand that makes shirts, pants, shorts, swimsuits, and hats with built-in UPF protection for the whole family.

It might go without saying, but it’s still worth mentioning that even false “sun” — like the light you are exposed to when in a tanning bed — should be avoided. And, honestly, when it comes to tanning beds and sunlamps, they really should be nixed entirely.

“No matter what you may hear at tanning salons, the cumulative damage caused by UV radiation can lead to premature skin aging (wrinkles, lax skin, brown spots, and more), as well as skin cancer,” said the Skin Cancer Foundation. “In fact, people who first use a tanning bed before age 35 increase their risk for melanoma by 75 percent.”

One more thing: Sun protection is important all year round. “UV rays can be as strong on cloudy, hazy days as well as on bright, sunny ones,” according to the American Skin Association. Well, it’s a good thing you have an arsenal from which to choose your best method — or two — of sun protection, right?