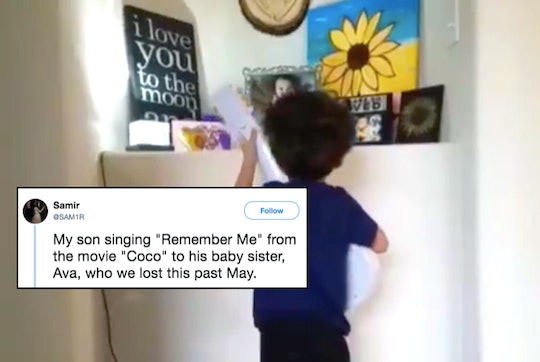 Never underestimate the power of an animated film, especially the power they have over young kids. Animated movies can touch kids in different ways — and more than just in the way where their songs never leave your kid's head. The messages made in the film can stick with them, make them feel better, and do more than just entertain their young and old audiences. Take, for example, Pixar's newest film, Coco, which debuted over the Thanksgiving holiday. Even if you haven't seen the film, then you can still definitely see why this video of a 4-year-old boy singing a Coco song in memory of his sister who sadly passed away will break your heart.

In the four days since the video was shared to Twitter, it has since gone viral — and for a very good reason — the video is so, so touching. In the video, the little boy can be seen with a small guitar in hand, singing a song from the movie Coco to a framed photo of a little girl in the sweetest way possible. The video would already be adorable on its own, but the message behind the video is even sweeter. The boy's father, who shared the video to Twitter, told the story behind his son's singing in his tweet:

My son singing "Remember Me" from the movie Coco to his baby sister, Ava, who we lost this past May. He's only 4 years old and he understands. He didn't even know he was being recorded. He just wanted to sing to her for her first birthday! Happy birthday Mamas! We miss you!

The full story behind the viral video is even more heartwarming than the inital tweet lets on. The boy in the video, Alexander, was singing a song from the movie, Coco, to a photo of his younger sister, Ava Lynn, who passed away at the age of 4 months old from a kidney condition, hydronephrosis, according to My San Antonio.

Coco tells the story of a little boy, Miguel, who lives in a lively Mexican village, according to Entertainment Weekly, but with the exception of his family, who believes they have been cursed by music. But, inspired by his desire to play music and his favorite singer (who is not alive), Miguel accidentally enters the Land of the Dead. It is there where he discovers generations of ancestors and his own musical talent, according to Entertainment Weekly.

Coco was especially touching to Alexander and his parents, Samir and Stephanie Deais, according to My San Antonio, because it "helped Alexander cope with the family's loss." This is a sentiment echoed by many. Coco, according to a review by The New York Times, successfully created a family-friendly cartoon about death and emphasizes the power of family. In the film, death is not treated as a scary object, according to parenting blog, Autistic Globetrotting, and also serves as an opportunity to introduce the topic to their kids. Samir agreed with this, telling My SanAntonio:

I couldn't be more thankful for the movie. It's made it so easy to understand for him and for us to explain to him in a beautiful way.

The lyrics to "Remember Me" go along with this message of keeping a loved one alive and portraying death as a part of life. "If you close your eyes and let the music play," the lyrics say. "Keep our love alive, I'll never fade away."

You can see why Alex would choose to sing this song to a photo of his sister. Although death is such a heavy subject to handle, it's much easier to introduce and talk about through the power of song. There is no wonder as to why this video would go viral — the Twitter video and its message is so powerful.