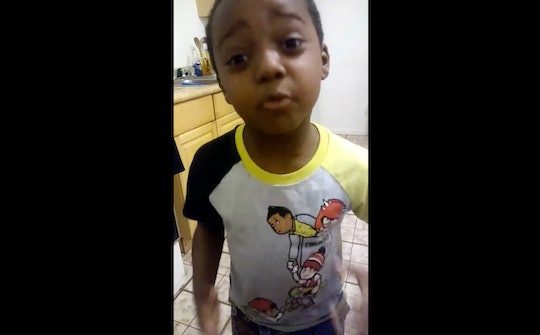 The seemingly endless stream of news about gun violence in the United States continues to take a toll on many. Beyond those who are directly affected by these senseless shootings, adults obsessively follow coverage when there's been yet another incident. But, even though parents may try and want to shield them from it all, kids are aware of what's going on around them. So there's no doubt that the constant barrage of gun-related deaths can perhaps be even more traumatic for the youngest among us. And that's why this video of a 6-year-old explaining gun violence has never been more relevant, or heartbreaking.

Yes, Jeffrey Laney — who has turned 7 since the video was posted — was talking specifically about the violence that affects his St. Louis community and his family in the video his mom posted to Facebook about six months ago. But what he had to say should serve as a message to lawmakers with the ability to make the nation's current gun laws safer right now.

Leeandra Cheatham had been upset about the recent drive-by shooting death of her 17-year-old cousin and had made a point to talk to her young son about violence when she decided to share his thoughts online in May, the St. Louis Post-Dispatch reported at the time. And what little Jeffrey had to say in his four-minute monologue is both impressive in its wisdom and insight , it's also infuriating — a child this young should not have to say it at all. Which is probably why it ended up going viral, racking up 229,000 views and nearly 8,000 shares since it was posted.

Jeffrey speaks right into the camera as he implores those around him to, simply, stop killing one another. His mom — who works at the St. Louis Justice Center, according to The Root — encourages him at times, but it's plain to see that he is truly speaking from the heart when he shares his feelings about gun violence. He said:

Wow. It's so awful that a kid this young — Jeffrey was in kindergarten at the time that the video was posted — is even thinking about these things. But he watches the news, Cheatham told CNN, and, as most Americans know, that makes learning gun violence pretty unavoidable.

On Tuesday, for example, a gunman randomly shot at an elementary school in Northern California, injuring one student there and killing four others elsewhere before authorities fatally shot him, according to The Washington Post. About half of the 26 victims in a mass shooting that took place in a tiny Texas church last week were children. And in the absence of any meaningful gun safety legislation to prevent such catastrophes in the future, a K-12 school in Florida has resorted to selling bulletproof panels to insert into children's backpacks to protect them. And that's just a tiny sampling of what's been going on lately.

In a Facebook message to Romper, Cheatham wrote that her son's reaction to some of the more recent mass shootings was "disappointment." But he believes he can make a difference, she wrote:

My son believes he can change the world and I remind him everyday we can always change lives and make a impact like he did before.. We still march, clean, and fight everyday for peace.

Obviously, the nation's children are being affected by gun violence in absolutely unacceptable ways. And, obviously, they shouldn't be, as Jeffrey says later on in the video:

Kudos to Jeffrey for speaking out. His thoughts are, sadly, still as relevant as ever.