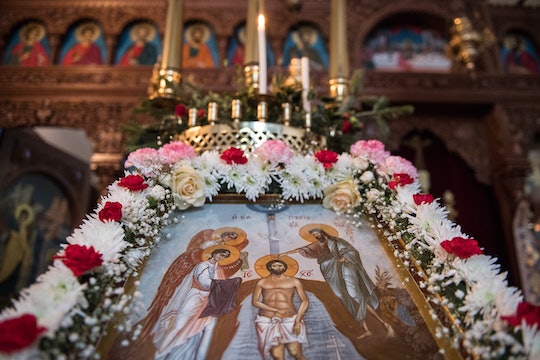 Listen, there are about a hundred (or more) different religions out there, and for important reasons. Many people find comfort and solace in their faith and all the traditions that come with them. But sometimes, there are aspects or rules of a certain religion that aren't too comforting for others. And this viral video of an aggressive baby baptism might just be the proof that not all religious traditions are heartwarming.

Yes, a video that has been circulating the internet for a couple of weeks now has Twitter users and moms everywhere up in arms about the techniques used in the baptism of a young baby. Although it's unclear who the baby in the video is, or exactly how old it is, what is clear is that this is no ordinary baptism. While some religions baptize or dedicate babies by rubbing oil on their heads or simply saying a quick prayer, this baptism was very acrobatic. Which, to be fair, might have been a tactic used for centuries, but the video that was shared hasn't exactly garnered positive feedback.

In the video, a priest is seen violently dunking a baby into a tank of water three times before handing the baby over to the parents.

Now, there are several aspects of the video that people on Twitter have reacted to. First of all, the priest seems to be fairly careless as he dunks the child into the water, and it appears as though the child could be getting hurt. Secondly, there is also a group of children standing behind the priest as he performs the baptism, and they are all visibly shocked at the proceedings.

Which are both things that Twitter users have pointed out online. "Is the pastor on drugs? How can he do that to this poor little soul," one person wrote in response to the video. "Isn't this child abuse," another wondered out loud. And honestly, they've all got some good points. But perhaps no one said it better than one Twitter user who simply stated, "This is gross. Child abuse is the only word I can find for it. Even adults don't get baptised like that." Obviously, every parent is entitled to honor their religious traditions in their own way, but the video was extremely startling for so many.

Nevertheless, several Twitter users pointed out that even if this baby doesn't specifically remember this baptism, it could still cause trauma later on in life. "When trauma happens before the brain is done developing the brain doesn't store the memory cohesively," one user explained, continuing, "because it can't comprehend what’s happening, but it stores the traumatic emotion. So you're right but I felt like it was important to point out this kid IS gonna be traumatized." But that might not be completely accurate.

Another Twitter user, who identified themselves as having been raised Greek Orthodox, stood up for the priest and family behind the video, reminding Twitter that plenty of babies are baptized in this exact same manner and come out on the other end perfectly fine. "That is actually an orthodox baptism," the user wrote. "Every baby baptised in orthodox tradition goes through this. I personally been through this as a baby and I am doing well, so don’t worry the baby won’t have any trauma."

Whatever the case, it's safe to say that this baptism likely isn't for everyone, and that's OK.