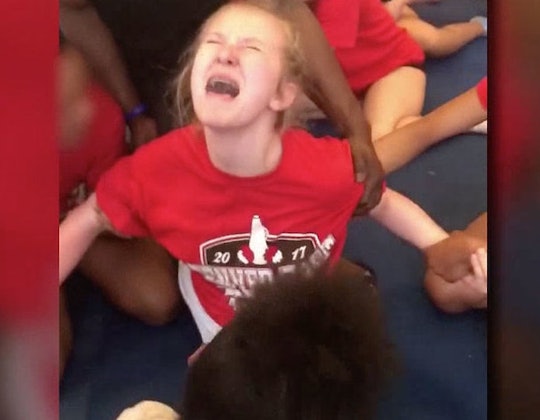 There is a certain amount of trust between parents and their children's coaches. It is expected that coaches will look out for children and care for them when parents aren't around. Unfortunately, that is not always the case. And that's why parents need to see this disturbing video of a cheerleader forced to do splits to understand the potential for mistreatment and how to prevent it from happening.

According to local NBC News Denver affiliate 9NEWS, police are currently investigating a disturbing video coming out of Denver's East High School that shows young girls in extreme pain as they are being forced into split positions. In the video, the girls' arms are held in place and they are being pushed lower still, despite audible cries of pain and requests to stop.

Romper has reached out to East High School for comment regarding the recorded incident and is awaiting a response.

In this disturbing video, 13-year-old freshman Ally Wakefield, who was one of three cheerleaders to come forward and speak to the NBC affiliate KUSA about the abuse, explained her traumatic experience:

It was tearing my ligament and my muscle at the same time. He was pushing down on the back of my right leg. He was pushing like with his other knee on my back to try to keep my posture straight.

The following video was recorded on cellphones and submitted anonymously to the media.

Note: This video contains disturbing content and may be uncomfortable for some viewers to watch.

Perhaps most disturbing are reports that school officials were in possession of at least one such video since June and no actions were taken until months later. According to 9NEWS, officials including the cheer coach, assistant cheer coach, high school principal, assistant principal, and deputy general counsel of Denver Public Schools have all been placed on leave during the investigation.

This video serves as a reminder to parents to play an active role in every part of their children's lives. While the abuse shown is awful, it is not entirely uncommon. Reports of coaches abusing and bullying players are far too frequent. So, in order to prevent such maltreatment, parents should take steps to establish strong relationships with coaches.

It ultimately comes down to knowing who your children are spending time with and deciding if you are comfortable with the program. Although criminal background checks are routinely done on prospective candidates for coaching positions, abusive coaches can still slip through the cracks — as what seemed to be the disturbing case in Denver.

Along with screening coaches and programs, parents should also be on the lookout for warning signs of abuse in their children and be prepared to take action if abuse is occurring. Signifiers of abuse can include withdrawal, apathy towards a previously beloved sport, and fear of authority figures. The next step would be to broach the topic of abuse with the child and determine if there is cause for concern. If so, parents should not hesitate to bring their worries to school authorities and get to the bottom of the situation.

If there is anything to be learned from the horrific events in Denver, it is the importance of monitoring children's interactions with authority figures and taking action when abuse occurs to prevent such incidents from happening in the future.