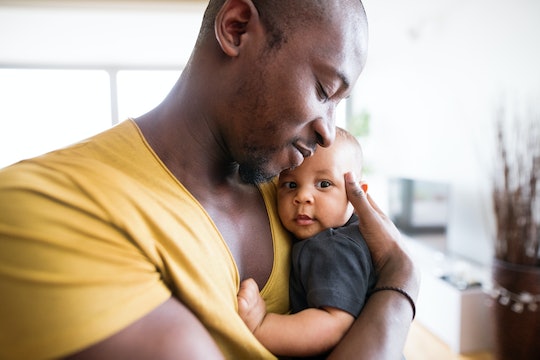 Breastfeeding is one of those parenting decisions that almost always falls squarely on mothers. Although, obviously, partners can have opinions about how their baby is fed — ultimately, the task of feeding an infant with breasts is up to the parent who has breasts. Because barring extreme measures taken to have a non-gestational carrier-parent induce lactation, it's not physically possible. However, that doesn't mean babies don't derive comfort from suckling on a nipple that doesn't produce milk; it's just a bit of a taboo subject here in the U.S. So it's not all that surprising that this video of a dad comfort nursing his baby has Twitter seriously divided.

It all started when a Twitter user who goes by "Daddy Duke" posted an 8-second video of his baby girl comfort-nursing from him, according to Scary Mommy. "Baby girl was OBVIOUSLY confused," he captioned the clip, along with cry-laughing emojis. Later on in the comments, Daddy Duke clarified that his daughter was asleep, but then woke up and latched onto him all on her own. Because why not? That's what she (presumably) does with mommy, after all. So what's the big, stinkin' deal, you ask? In my opinion, it all goes back to people sexualizing breasts/nipples in general — except a baby latching onto a nipple — or anything within their reach, really — isn't sexual in the slightest. It's simply normal, infant behavior.

Still, many Twitter users were clearly disturbed that this father was allowing his baby to suckle on his nipples. "You want a baby to suck on your nipples for no reason! Weird," one person commented.

Another Twitter user wrote, "You play too much don’t let her do that."

Yet another person commented, "This is child-abuse to the extreme. This man is a jerk off. Not cool brother not cool."

It's worth noting there were a few voices of reason amid the criticism. "Actually if a mans nipples are stimulated every day for enough time every day for a couple of weeks, they can lactate. Info straight from my human sexuality professor!" one Twitter user pointed out.

Another person commented, "It's shocking how many people 1) know nothing about children and 2) sexualize normal infant behavior."

Another Twitter user wrote, "People talking about how it’s 'wrong' and 'disturbing' are dumb as hell for being in they feels over an 8sec video with a confused but loving dad NOT overreacting to his baby comfort nursing."

For the record, this by far isn't the first case of a baby "breastfeeding" from dad. In July, a Wisconsin dad named Max Neubauer made headlines when he did just this while his wife, April, was recovering in the ICU after suffering from seizures following labor, WBAY News reported. A nurse offered for him to try out a supplemental nursing system comprised of a nipple shield, a feeding tube, a syringe, and some formula. And so, he "breastfed" his newborn daughter, Rosalia, when her mom couldn't. "If you are in that situation like I was, when April had no ability to do it, if you have the opportunity, go for it. It's worth it, definitely," Max said.

Like this dad, Chris Allen, whose baby had a difficult time transitioning from breast to bottle after his partner, Jennifer, went back to work, Parents reported. His solution? He "tricked" baby Destiny by cutting a hole in his shirt and positioning the bottle through the hole, as if she were actually breastfeeding, according to PopSugar. (Spoiler alert: She contently drank the bottle this way.) "Mommy had to go to work, so daddy's helping out," Allen says in the clip, which has been viewed. "I guess it's like breastfeeding right? Gotta love it." His video ended up going viral back in 2016 — and I wouldn't doubt if other desperate dads tried it out for themselves.

Whether a father is comfort-nursing to soothe his fussy baby in mom's absence, or he is simply feeding his baby in a way that mimics breastfeeding, neither of these are "gross" or "inappropriate." These loving dads are just doing the best they can to comfort and nourish their breastfed children when mom is unable to. And that's perfectly natural, if you ask me.