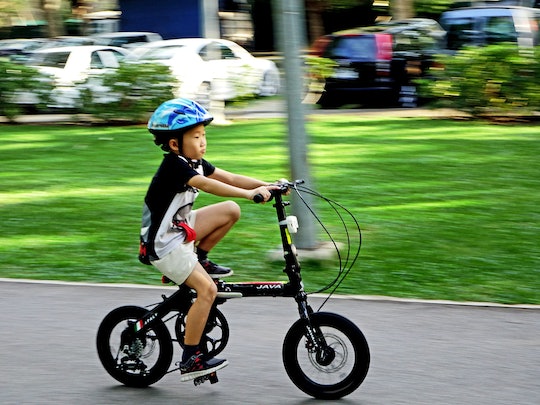 These days, it's hard to share anything on social media without people putting in their two cents' worth — especially for parents. A simple photo of the kiddos making Christmas cookies can morph into a debate about the dangers of food coloring. An innocent shot of a toddler asleep in his car seat may elicit no less than 20 comments about the chest clip not being positioned quite high enough. A question about which formula is best is suddenly a "breast is best" lecture. Exhibit one: This video of a father saving his son before crashing his bike is serious dad skills. However, the internet is seriously pissed about one thing.

In the video — which was shared yesterday on Reddit — a father is teaching his young son to ride a bicycle without training wheels. The little guy is peddling along enthusiastically when his dad decides to let go. At first everything is going great, with the son keeping his balance and still cruising along — until the dad realizes his boy is heading straight for a parked vehicle. (Okay, so his steering skills still need a little work.) But never fear! The barefooted papa jumps into save-my-kid-from-imminent-bodily-harm mode, hauls @ss to catch up with the bike and scoops up the boy just in the knick of time. Whew! Crisis averted.

I mean, those are some serious dad skills, right? This father deserves praise and recognition and all the jazz. Except, this is the internet we're talking about here, so someone is bound to find something to hate on. Instead of recognizing this dad's bad*assery, Reddit users took the video as an opportunity to become helmet police. In fact, "That kid needs a helmet," was the very first comment. "I almost never see kids with helmets. It's really shocking. I'm a grown up and I won't even test ride around the block without a helmet!" another person wrote. Yet another Reddit user chimed in with, "Up here in Canada i[sic] see kids in helmet riding tricycles. They won't even let us on the ice to skate unless the child has a legit hockey helmet."' Still another person took a totally unrelated jab, writing, "That dad needs a shoes." (LOL. Really? That's the most important thing you gathered from the video?)

Still, others took a different approach by sharing their bicycle accident tales — and how a helmet literally saved their lives. "I had this horrible wreck, going down hill pretty fast and hit some rocks," one commenter wrote. They continued:

I hit so hard. I slammed into the ground and my bike flew up and over my body into the street. I landed right on my helmet. I was bloody and embarrassed but I was alive! Hitting those sharp rocks right on my head would have been really bad.

Another Reddit user shared his own harrowing bicycle accident. "I came off my bike on a road riding back from work and smashed the helmet off my head," the person wrote. They continued:

I went over the handle bars and landed head first. The helmet split from where my left temple hit the ground. I spent 4 days in hospital, with extreme memory loss. I'm OK now but have no recollection of the accident at all. I like to tell this story to people that don't use helmets...

As a nearly-30-year-old millennial, my childhood summers consisted of riding a bike around the neighborhood with my best friend — unsupervised and without a helmet. Most weekdays, we would also ride our bicycles to the local swimming pool in our small town. It was more than a mile away from home, and we had to navigate moderate traffic while riding on the street. Still, no helmet. I don't remember ever crashing my bike, thankfully. Helmets just weren't a thing at the time where I lived. But these days? I scowl and think, "Where the heck is that kid's helmet?!' every single time I spot a child (or anyone, for that matter) cycling without head protection. Is the importance of a helmet more widespread these days? Are parents more educated/paranoid? I have no idea.

What I do know is children should technically be wearing a helmet every time they get on a bike, as recommended by the American Academy of Pediatrics (AAP.) Still, I'm willing to overlook this particular safety gaff because no one was injured — and because this dad's ninja-like reflexes deserve some serious kudos.