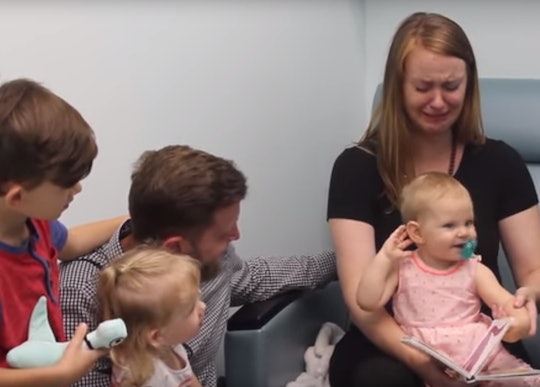 If you ever need to fall down one of the sweetest rabbit holes on the internet, turn to YouTube and search for cochlear implant videos. Seeing the joy in someone’s eyes when they hear what the rest of world can for the first time is a guaranteed way to lift your spirits, even on the worst of days. And among those inspiring moments, this new video of a mother seeing her baby hear for the first time is definitely one for the books.

Ayla Esler is just 1 year old and has never heard the sound of rain, or her siblings playing, or her mother singing, according to Newsweek. The little girl failed her newborn hearing screening and was discovered to have enough hearing loss that hearing aids were not an option, as Newsweek reported.

The delightful moment was filmed at Cook Children’s Ear Nose and Throat Hospital in Fort Worth, Texas, who posted the video to its YouTube channel. In it, the toddler — who was sitting on her mother’s lap and playing with a book — immediately reacted when the implant went live, shaking her head and holding her hand up to her ear like she had seen a cartoon character do it on TV before. But it’s her smile that is so touching, especially considering how overwhelming that moment might be for anyone, let alone a baby and her parents, Will and Anna Esler.

But Ayla seems to take her new sense of sound in stride, making happy vocalizations and smiling around her pacifier while keeping her eye on the technician. It’s Anna, the toddler's mother, who becomes overwhelmed with emotions, and her face crumples into tears of joy as she witnesses her daughter hear for the first time. As Anna told Newsweek of the moment:

Every child responds differently when their cochlear implants are activated, and so we didn’t know what kind of reaction she would have. And even though I knew it would work, there was still some doubt in my mind, so when I saw her responding to sound I was overwhelmed by thankfulness to God and to everyone else who has been a part of this journey.

Ayla's father, Will, wasn’t expecting such a positive response right off the bat. He told Newsweek he expected their daughter to be overwhelmed when the implant turned on and to cry or scream, but to see her positive reaction to the moment was “just incredible.” He did share in a separate interview that not every minute has been totally smooth sailing; according to NBC News, the next day Ayla was fussing a bit when he attached the cochlear implant device, but he was able to sing to her to help her settle down.

Dr. Lisa Christensen, an audiologist at the hospital where Ayla’s implants were done, explained to NBC News that the device the toddler received helps the deaf hear and that new technologies now allow users to hear speech that sounds remarkably natural. And just from watching the video, it's easy to see how long this journey has been for the Esler family. "When I saw her happy and dancing and responding to sound for the first time in her life I just lost it because we’ve been waiting a long time for that,” Anna told Fox 4 News.

And the Eslers aren't alone in feeling overjoyed for little Ayla.

One other adorable element of Ayla’s video shouldn’t be overlooked — the responses of her brother and sister who stood close to their dad watching the whole event. When you watch the video, be sure to see just how the two children are so enraptured by it all, engrossed in the whole process because it undoubtedly speaks to how much they care for their little sister.

Little Ayla is one example of the remarkable resilience of children. Here’s hoping for all good things for this heartwarming, lovely family.