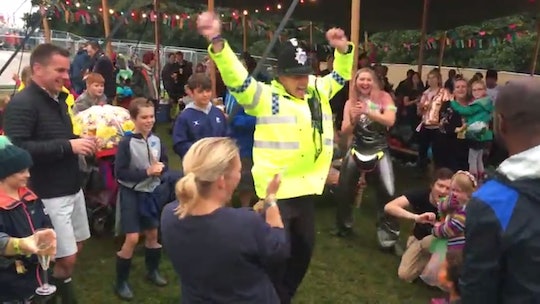 According to the Oxford English Dictionary, the term “dad dancing” is defined as “awkward or unfashionable dancing to pop music, as characteristically performed by middle-aged or older men.” It’s a wonderful phenomenon that has undoubtedly embarrassed countless children. It's usually followed by Googling the meanings of new slang or showing some affection for their offspring in public. It’s just what dads do. And while one kid is probably probably cringing in a corner about the latest viral sensation, this video of a police officer “dad dancing” is making everyone’s day so much better.

Special Constable Jason Cox — a 41-year-old dad of two from England — showed off his rhythmic moves after he was challenged to a dance-off while patrolling a British music festival last month, according to Sky News. And fortunately, it was all caught on tape.

In the 28-second clip, captured by a colleague from the Dorset police force, Cox showed off his dance skills to OutKast’s “Hey Ya!” Festival-goers cheered, clapped, and danced along with the police officer as he strutted his stuff while in his florescent yellow uniform and helmet. Oh, and he was wearing glitter face paint, so that makes the video just so much more, dare I say, arresting.

If you needed a little pick-me-up, just play this video on repeat for the rest of the day:

Dorset Police shared the viral video on Facebook over the weekend, and it has since been watched more than 54,000 times and shared on various social media platforms as well.

"We hope you love 'dad dancing' Special Constable Cox as much as we do!" Dorset Police captioned the video posted on Facebook. "When he was challenged to a dance off at Camp Bestival he couldn't resist strutting his stuff before being inundated with selfie requests!"

And people couldn't get enough of Cox's dance moves. One viewer commented on Facebook: "You sir are a legend. Well done, getting involved with the community and the people."

"After the recent violent incidents in London this year it's great to see the other side of policing," another fan of the video wrote.

According to The Telegraph, Mark Cooper, assistant chief constable of the same police department, praised his colleague's dance moves and the work he and other officers did at the musical festival. Cooper told the news outlet:

Whilst being vigilant in protecting the public, as a safe family event, officers were able to spend time interacting with festival goers and families. By engaging with members of the public in this way, we hope it will build relationships and encourage young people in particular to run to us when they're in danger, rather than be scared of the uniform.

Just as headlines have been plastered with unsettling news about the nation's health care and the latest drama in the White House, this video is definitely a breath of fresh air we all needed to get through the rest of the week.

So, thank you, Mr. Cox. Your "dad dancing" moves have brightened many people's day.