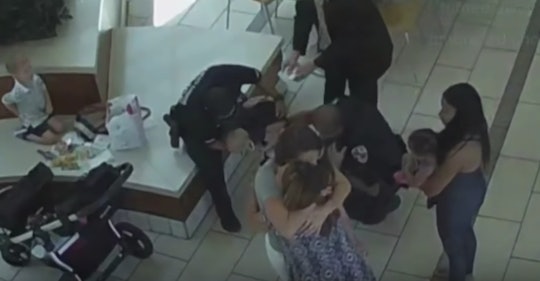 This Video Of Police Saving A Choking Baby Is A Scary, But Important Reminder For Parents

Few experiences in life are more terrifying than witnessing your child choking on something. Sure, parents tend to be particularly careful around certain foods known for their choking hazard — like grapes, hot dogs, popcorn, etc. Parents will make sure to cut these foods up in tiny pieces (or avoid them altogether) when their kids are young. But really, children can choke on anything, at any time, something that one mom recently experienced. Over the weekend, a video of a police officer saving a choking baby was shared online and it's a scary, but important reminder that accidents can happen so fast.

More Like This
This Problem-Solving Toddler Filled Up His Toy Car With “Gas” From The Garden Hose
18 Best Sand Toys In 2021 For Babies, Toddlers, & Kids
You Will Not Regret This Perfect Baby Pool From Target
Experts Offer Tips On How To Wean — Whenever You’re Ready

On July 27, Ana Graham was grabbing lunch with her two young children at The Gardens Mall in Palm Beach Gardens, Florida, according to CBS News. Her 14-month-old daughter, Lucia — who has been eating solid food since she was 9 months old — had just started munching on a chicken nugget, when her mother immediately noticed something was wrong, according to the Palm Beach Post.

“On her second bite, I noticed she looked at me with her eyes wide open. She started turning red,” Graham told the Palm Beach Post. Graham quickly pulled her toddler from the stroller and delivered blows to her back, but the chicken remained lodged in Lucia's throat, according to the news outlet, and she started turning blue. That's when two Palm Beach Gardens police officers — Robert Ayala and Officer Rafael Guadelupe — who had been seated across the food court, sprung into action, according to CBS News.

As you can see from the mall surveillance footage, below, the incident seems pretty terrifying.

"Officer Ayala stepped in, I handed her to him. He sat down and so quickly started performing what he needed to do to make sure she was OK," Graham told WPTV. "And I sat on the floor panicked. I just wanted to make sure she was okay." After back blows, followed by a finger sweep of the toddler's throat, and then more back blows, Ayala was finally able to dislodge the chicken from Lucia's throat. (During the dramatic incident, Officer Guadalupe had also radioed for the Palm Beach Gardens Fire Rescue, and tried to keep Lucia's mom calm, according to the Palm Beach Post.) "They're our heroes. They are the best, best angels we could've had that day at the mall," Graham told WPTV.

As a precaution, Lucia was still checked out by EMT staff at the mall — but she was able to go home with her family that day, thanks to the officers' quick actions. "They knew exactly what to do to save her life," Graham told WPTV. "So, thank you so much officers — because if it wasn't for you guys, we probably, definitely wouldn't be here with our Lucia."

According to the Mayo Clinic, the best course of action when it comes to helping a choking infant who can't breathe is to lay him face-down on your forearm, which is resting on your thigh, and then deliver five, firm back blows in the middle of the back. If this doesn't work, you should lie the infant face-up on your forearm with his head lower than his trunk. Then, using two fingers placed at the center of the infant's breastbone, give five quick chest compressions. Back blows and chest thrusts should be repeated if the infant still isn't breathing — and emergency medical help should be called.

Guys, I don't know if it's the pregnancy hormones or what, but I can't watch the surveillance footage without tearing up. That poor toddler, and that helpless mama... Thank goodness the police officers were at the right place at the right time. Because Office Ayala's training was spot-on and his quick actions, that little girl is still alive today.

This close call also serves as a reminder to caregivers to make sure they are trained in infant first aid and CPR. Because an emergency situation can happen in the blink of an eye, and there won't always be trained professionals nearby to save the day.