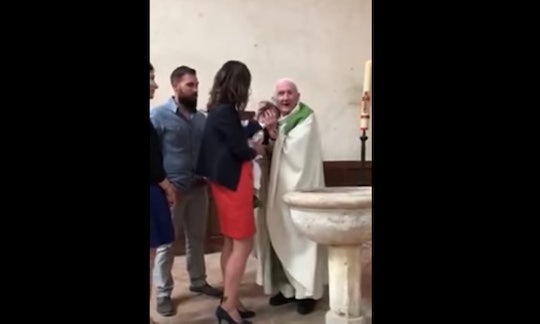 If you're Catholic, then one of those proud, early parenting moments as a person of faith is watching your infant being baptized. This occasion often includes a special outfit, gathering with friends and family, and taking photos with the godparents. Oh, and the actual ceremony itself, of course. During the actual baptism, a priest will sprinkle or pour holy water on the baby's head, as the parents promise to raise him/her in the Christian faith. Godparents are typically chosen to help guide the child during his/her religious journey. It's all very symbolic and uplifting. Except for one family; a disturbing video of a priest slapping a baby during a baptism surfaced recently and the internet has furiously expressed their outrage over what they witnessed.

Footage has emerged — and proceeded to make rounds in various forms of social media — of what appears to be a priest slapping a crying child during a baptism, as People reported. The YouTube video was initially shared on Reddit, along with the caption, "A priest slaps an infant during his baptism.” The original poster also wrote, "this happened today in France, I'm really shocked."

So far, the YouTube video alone has been viewed more than 500,000 in just one day. And it isn't hard to see why.

In the clip, a priest is touching the face of a crying baby while talking as a woman — who is presumably the baby's mother — holds the child. Another woman and a man (his father, perhaps) stand nearby. As the child continues to cry, the priest is heard speaking in French, saying the boy is having a “tantrum” and he needs water poured on his head to become a "little Christian," as Newsweek reported. According to the publication, the priest then tells the boy in French, "calm down, calm down, you must calm down." Then, suddenly, he slaps the child on his cheek. Naturally, the little guy starts wailing even more.

The parents are clearly shocked by had just happened. However the priest proceeds to hold the child closer while continuing to talk. Except, the baby isn't having any of it. At all. Another woman comes from off-screen and approaches the priest to say something to him while briefly touching his arm. As the baby continues to writhe and cry, the man in the video, who's presumably the child's father, has finally had enough — and he forcibly removes his baby from the priest's grasp. That's where the footage cuts out.

Although the clip is only 43 seconds long, it's certainly made a lasting impression. In fact, plenty of Twitter users described in detail exactly what they would have done if they were in these parents' shoes. "Where can I find this priest so I can slap him right back for slapping the baby," one Twitter user wrote while sharing the clip.

Another person tweeted, "If this my son I would have put down that priest so hard God and his angels would have felt it. I would break that so called priests face and arm."

Yet another Twitter user wrote, "Omg if a priest slapped my kid I beat the Holy Ghost right out of him!"

It's worth mentioning that no one, including the priest or the parish, in the video has yet been identified. Still, as one Reddit user pointed out, a church is one of the last places parents would expect such an act to happen, which probably has something to do with why the parents didn't immediately intervene. "The church has a lot of power over people. There are few instances where someone has instantaneous and expected trust and respect, the church is one of those places," the Reddit user commented on the original thread. "The last thing you expect is for someone you trust and respect to hurt you or your child."

I'd like to think that I would immediately rip my child out of any person's arms — church official or not — if a physical act of aggression were involved. (Then again, I've yet to be in such a situation.) Although it's not clear if there will be an repercussions for this priest as a result of his actions, it goes without saying that children and their parents should feel safe among church officials.