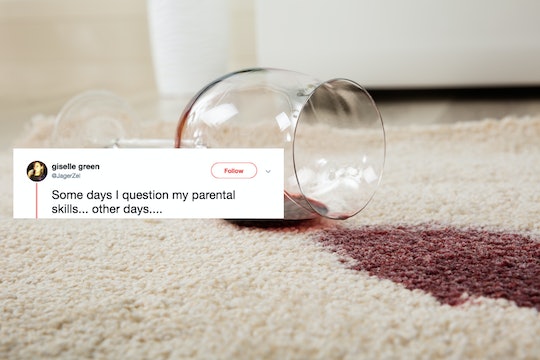 After a long day of mom-ing, not much sounds better than a nice glass of wine. But imagine, you have just kicked back to taste the sweet grape nectar of the gods and let some of that tension out of your shoulders when bam! it spills to the floor. Well, this video of a toddler knocking over his mom's wine glass shows that particular nightmare coming true, and parents on Twitter can't get enough of it. Fortunately, the tot's mom has a great attitude towards the whole debacle.

Giselle Green is a mom from the U.K. who recently went viral for a video clip that she tweeted of her son Sammy straight up Donkey Kong smashing her glass of wine out of her hands, as PopSugar reported. Spoiler alert: the wine went all over the little boy — and his mom's carpet. "Some days I question my parental skills . . . other days . . ." she captioned the short video that has since gone viral.

The video is a bit alarming at first glance and some may worry that little Sammy was injured when the wine went on his head, but Green posted a follow-up tweet to reassure her followers that he is A-OK.

"Don't worry. No Sammy was hurt in the making of this video," she captioned the second tweet. His popularity has even led Green to create a hashtag for her son, according to HuffPost, #redwinesammy.

Green's original video tweet has racked up nearly 50,000 likes and 14,000 comments since she posted it on Sunday. A number of people responded to Green's tweet by tagging parent friends of theirs and making comments like, "this is totally your kid." Others were in awe of the experience, like the one who wrote, "Oh my god! I don't know wether [sic] to laugh or cry!"

There were a number of people who could relate to Green's desire for wine, and her struggle of having a toddler who can't not destroy whatever is in his path.

While I feel for her — and her carpets — the video really is just plain funny. And plenty of people on Twitter would agree with me on that point.

There's just something so pure about this pint-sized, blonde haired cutie getting completely covered in mama's grape juice.

Parents who responded to Green's tweet were quick to point out that Sammy isn't alone in his innocent naughtiness. As one user mentioned, he isn't even slightly distracted by the numerous toys and games that were in between his mom's glass of wine and his clumsy fingers.

Others speculated that Sammy's "accident" wasn't accidental at all. And I would have to admit, there is a certain sparkle of chaos in those big blue eyes of his as he waddles towards his mom — and her wine.

In another follow-up tweet, Green said that she isn't too torn up about the mess because she wanted to get new carpet anyway. Regardless, one user recommended that she pop another bottle — this time a bottle of white wine — and use it to clean up what I can only imagine turned out to be a very nasty stain. And while HuffPost doesn't advise using this particular method of cleaning up red wine stains, I doubt that Green would turn down an excuse to grab some more wine.

All in all, Green may have lost out on a well-deserved glass of wine, but she got a good laugh out of the experience and so did her followers. And her clip makes one heck of a home video to show Sammy down the road. Cheers!