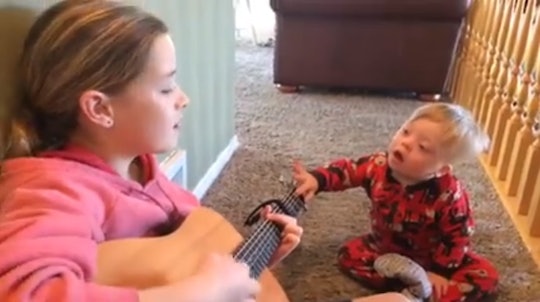 Music truly is magical. It can inspire your creativity, some soothing tunes can calm you down after a long day, and your favorite Taylor Swift song can perk you up when you need it most. And kids benefit from music just as much, as evidenced by this viral video of a toddler with Down syndrome — who speaks just a small number of words, according to ABC News — singing along with his sister. The video has amassed almost 1 million shares and 40 million views on Facebook since it was shared earlier this week and the number continues to grow because it's just that heartwarming.

Mom Amanda Bowman Gray shared the massively popular video on Facebook on Jan. 15 of her 2-year-old son named Bo, who has since become somewhat of a viral sensation, jamming out to “You Are My Sunshine” with his big sister, Lydia. Bowman Gray shared on Facebook, tagging her husband Caleb, that their daughter was watching Bo while she showered one day and discovered the sweet moment when she got out. She captioned the video:

If she didn’t have a guitar I don’t know if she would know how to babysit him. This is her go to. It’s proof that music therapy works. Bo is 25 months old and has a 12 word vocabulary. Every word he has learned has been through music and singing.

Bowman Gray told ABC News that young Bo has Down syndrome and was born with several heart and lung conditions. Bo has also "been undergoing several treatments that doctors hope will make his heart beat normally," according to ABC News. When the little boy was in the hospital, Bowman Gray told the outlet that the family used music as therapy for him, explaining:

After weeks and weeks (which ended up in months) of being in the hospital in a silent room of the CICU (Cardiac Intensive Care Unit) we got special permission to bring a guitar in and sing to him in hopes that it would comfort him ... We feel like he's defying the odds. Thanks to Lydia and her determination, she pushed forward with music therapy. ... We're so proud of our kids.

This video is beyond adorable and Bo's ability to learn to speak through music is something that will instantly warm your heart. (And, how sweet is Bo's older sister Lydia?) Bo's mom told ABC News that "You Are My Sunshine" has become his go-to song to sing along to after he had heart surgery.

As Bo's mom explained on Facebook, "music therapy works." According to Lonestar School of Music, for children with Down Syndrome, music can be transformative and can help promote development. Music can help kids with their memory, coordination, cognitive skills, and self-esteem.

Little Bo and his sister Lydia clearly have a special bond, especially when it comes their jams sessions. And this particular jam session has captured the hearts of millions. While Lydia is also absorbing all the excitement of viral fame, as Bowman Gray shared on Facebook, she told her mother that she doesn't want the attention to be on her at all, even though she also appears in the viral video. In a post shared on her husband's Facebook page, Bowman Gray revealed:

Some of you I’m sure are wondering how Lydia is taking all this in. She’s extremely calm and wise beyond her years. She is so humble. She said to me yesterday, “Mom I don’t want this to be about me. This is about Bo ... and people realizing that music can be used to teach others like him”. I couldn’t be a more proud mother because how easily children her age could run the other direction and turn the attention on herself. I let her stay home from school today. We called it a “mental health day”.

Bowman Gray went on to thank followers for all the supportive and loving comments they have left on their social media accounts during this fun time. One user even suggested that little Bo should appear on The Ellen Show.

In addition to having a sweet older sister, Bo also has three brothers, according to ABC News: Thomas, 15; William, 13; and Hunter, 3. If they're all as musically inclined, maybe one day we'll be seeing them on tour together. So, listen up, Ellen DeGeneres! Little Bo is ready for his close-up.

More Like This
20 Stocking Stuffers For Kids Under $20
Spread Some Christmas Cheer In Your Child’s Bedroom
101 Advent Calendar Activities, From Books To Read To Cookies To Bake
13 Brilliant Gifts For Kids Obsessed With Music — Especially Singing Very Loudly