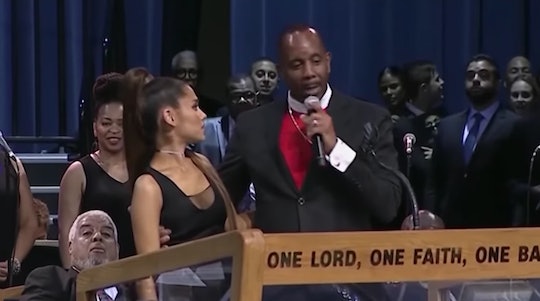 When you get an invitation to perform at an iconic singer's funeral — like The Queen of Soul Aretha Franklin — it's a huge honor. Musical performers and speakers undoubtedly put in hours of preparation leading up to Franklin's funeral in order to pay proper respect to the singing icon. Well, one celebrity appearance in particular made a lasting impression — just not in the way she had hoped (And it wasn't her fault in the slightest.) With that said, this video of Ariana Grande and the bishop at Aretha Franklin's funeral has prompted an apology. Sort of.

Aretha Franklin's funeral was a joyous eight-hour affair — which was held on Friday, Aug. 31 — that featured an impressive lineup of performers, including Jennifer Hudson, Stevie Wonder, Ariana Grande, and more, as well as prominent speakers, like former President Bill Clinton and the Rev. Jesse Jackson. Grande sang a soulful rendition of Aretha Franklin's "Natural Woman" — and she did phenomenally, for the record. (If you have a moment, check out her performance; you won't regret it, I promise.) Following her pitch-perfect delivery, Ariana was joined on stage by Bishop Charles H. Ellis III, who led Aretha Franklin's funeral. Right away, Ellis put is arm around the singer, noticeably well above her waist — and it his hands ultimately reached around and rested on the side of her breast.

Judging by her body language, Grande seemed uncomfortable with being touched. (You know, on the boob, and all.) However, the bishop held her tightly and continued talking. “I’ve got to apologize because I have to brush up,” he said to the singer while the pair stood at the podium together, according to The Washington Post. “My 28-year-old daughter tells me, ‘Dad, you are old at 60.’ When I saw Ariana Grande on the program, I thought that was a new something at Taco Bell. Girl, let me give you all your respect.”

And this, my friends, is how Grande's soulful performance honoring the life and legacy of Aretha Franklin was immediately overshadowed by a bishop's inappropriate touch (and offensive remarks) on live TV. Because Twitter promptly erupted at Ellis, according to BuzzFeed, with some referring to his actions as "groping" and even "assault." On Twitter user wrote, "She looks noticeably uncomfortable and clearly trying to get away without causing a scene. This video pisses me off."

Another Twitter user wrote, "THIS IS SO DISGUSTING AND DISRESPECTFUL #RespectAriana."

As People reported, Ellis has since issued an apology following public outrage about the uncomfortable touching on live TV. "It would never be my intention to touch any woman's breast. ... I don't know, I guess I put my arm around her," Ellis said on Saturday. "Maybe I crossed the border, maybe I was too friendly or familiar but, again, I apologize." The bishop went on to explain that he hugged everyone — both female and male artists at the funeral. "Everybody that was up, I shook their hands and hugged them. That's what we are all about in the church. We are all about love, he said, according to the publication. Ellis continued:

The last thing I want to do is to be a distraction to this day. This is all about Aretha Franklin.

Something else Ellis apologized to Grande for was what he said to her as he had his arm around her, according to The Washington Post. "I personally and sincerely apologize to Ariana and to her fans and to the whole Hispanic community," Ellis said. "When you’re doing a program for nine hours you try to keep it lively, you try to insert some jokes here and there." Grande has yet to publicly respond to the incident or Ellis' remarks.

Personally, I believe Ellis should have left his apology at, "It would never be my intention to touch any woman's breast," and called it a day. (Even though that's what he clearly did, intentional or not. How could he not realize that's what he was doing? ) To me, the fact that he immediately back-peddled and said, "maybe I crossed the border, maybe I was too friendly or familiar," shows that he still thinks he did nothing wrong. Because if the entire exchange was super awkward and uncomfortable for folks at home watching, then I'm willing to bet Ariana Grande was roughly a million times more creeped out.