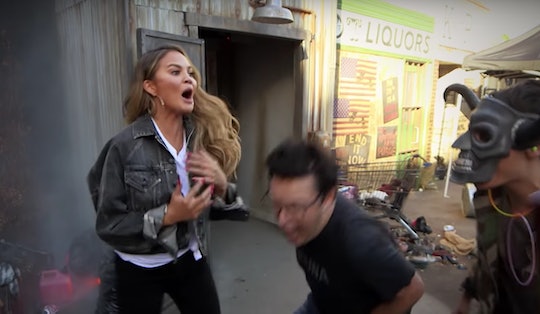 It's that time of year again: the season for cozy knits, pumpkin spice mania, and for many, finding every conceivable way to freak your friends out beyond comprehension. Ellen DeGeneres is amongst the lattermost group, as the well-known prankster has truly topped even her funniest stunt this year. (This is the woman who routinely has "monsters" and other fictional characters jump out of furniture on her daytime TV show to scare guests, so you know she's in her prime.) But this video of Ellen DeGeneres' producer and Chrissy Teigen in a haunted house will actually leave you laughing so hard, you'll forget to even be scared.

"One of my favorite things to do this time of year is to send Andy to a haunted house," DeGeneres began on a new segment of The Ellen DeGeneres Show. "And so I sent him with Chrissy Teigen to The Purge Maze at Universal Studios Halloween Horror Nights. I would like to say that Andy was really brave, but that would be a total lie, so let's all enjoy."

The video opens with Andy Lassner saying he's at the haunted house solely for DeGeneres' "insane and sick and twisted amusement," before introducing Teigen as his "fellow model."

The video opens with Lassner and Teigen being scared by an actor in a goat mask wielding a bloody bat. Lassner laments that you're not supposed to be getting tricked before it even starts, but Teigen holds strong and the two enter the house together.

All in all, the pair weave through the dark, spooky rooms of the haunted house and it's clear that Lassner is no stranger to the event. Throughout the whole thing, he hilariously comments on what should and shouldn't be happening ("Look for holes!" he said at one point, noting that where there are gaps in the walls is usually where something scary can jump out at you) and then tries to talk himself through the rest by repeating that it's all just "fake" and "these are just dummies."

Save to say, the coaching is ineffective at best.

Despite all the spooks, both make it out alive, and live to tell the tale. "That wasn't bad!" Teigen says as she exits the house. "It's over," Lassner says, before they're spooked one last time. "Did you feel safe with me?" he asks Teigen. "I did, I have to say, you were the alpha. You usually cower but you really took an alpha male role here. Are you so happy it's over?" Lassner responds: "I've never been happier about anything."

Though the segment was released today, the talk show host had been teasing the episode for days.

"My favorite thing of the whole year is happening this week," DeGeneres wrote on Twitter, alongside a photo of Lassner and Teigen being scared outside of the haunted house. "In this picture, @AndyLassner and @ChrissyTeigen aren’t even IN the haunted house, and yet, this."

Immediately, fans started responding agreeing that Lassner's annual haunted house visit is also among their most time-honored traditions. "One of my favorite things about Halloween is watching @andylassner go through a haunted house!! Can't wait!!" one comment read. "I can’t wait for this. I look forward to this every year," said another.

All in all, it seems Lassner and Teigen did make it out of the haunted house alive... albeit with plenty of great stories to share. She followed up the video's release with a tweet, saying: "Andy is a national treasure." Indeed he is, as is Teigen.

Let's hope that this collab will inspire DeGeneres to add Teigen in on Andy's annual tradition.