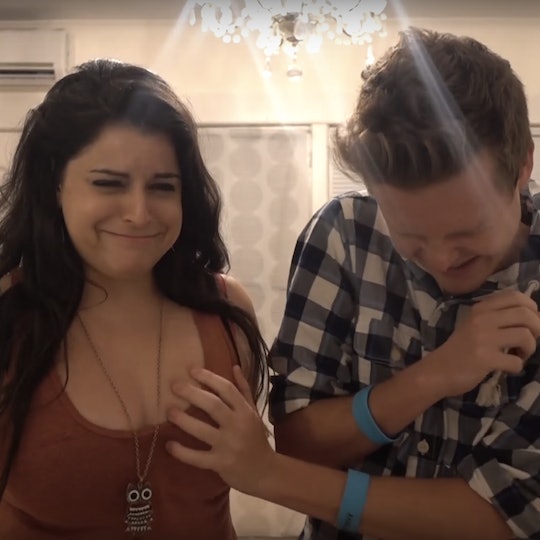 YouTube sensations Bria and Chrissy have followed up their hilariously awkward video of lesbians touching penises for the first time, with a surprisingly body-positive and equality-boasting one. The couple filmed gay men touching breasts for the first time and while the result was as funny as one might expect, it also ended with a message we all need to hear.

I just think that in the end we're all humans. They're just body parts. A boob's a boob.

Of course, the gentlemen who experienced boobs for the first time in their lives also had some gut-busting reactions, comparing a woman's breast to a thawing chicken cutlet or a dead jellyfish. The majority described a boob as "squishy" and one suggested that he could easily make a steak out of a woman's boob. So, you know, breasts aren't for everyone.

But being body positive is, and this video has a lot of it. Even though the men touching the boobs have absolutely no interest in them, don't find them enticing and are even a little "weirded out", they are also able to celebrate them as part of a human body. In the end, even if we don't find something particularly attractive, it doesn't mean we can't appreciate it for what it is.

Who would have though a video of a bunch of gay guys touching boobs for the first time would carry such an encouraging message? Either way, I'm glad it does because I, for one, enjoy my boob fun with a side of body positivity.