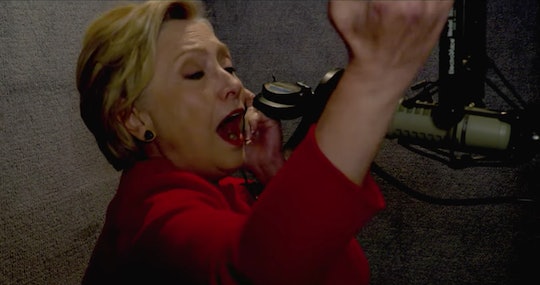 With the holiday season just around the corner and the year crawling to an end, many people are reflecting on the events that took place in 2017. The Daily Show with Trevor Noah has honored this epically controversial year with an original musical tribute titled, "Song for Women 2017." Between its references to the Women's March, sexual assault victims coming forward, historic accomplishments by women, mansplaining and more — this video of Hillary Clinton belting out is exactly what you need to finish 2017 on a high note.

"If there's one group of people who have defined this year, it's been women," Noah says in his bit leading up to the song, according to People. "So we asked Desi Lydic and Dulcé Sloan for their thoughts, and they gave us a whole song." After a short skit of the pair preparing for the music video, the song begins with a shot of the fictional album cover, which features Desi's and Dulcé's faces pasted on ovaries connected to a uterus. Because women, of course.

That's when this gem of a musical masterpiece finally begins. "Started this year marching hand in hand to show that p*ssy-grabber with the terrible tan." LOL. Obviously, this is a nod to the Women's March in January, during which women from around the world protested following President Donald Trump's election win.

The lyrics continue with:

Everywhere I look a lady resisted. Try to stop Lizzie yet she persisted. All around the world, we've come so far, Saudi women sitting at the wheel of a vehicle. PM, chancellor, all we've reached. South Korean women even getting impeached. What a year for women. It's why we're singing. Finally see us winning. What a year for women.

I'm loving this nod to Sen. Elizabeth Warren, who was silenced back in March by Republicans in the middle of her speech criticizing Trump's attorney general nominee, Sen. Jeff Sessions. The Washington Post reported that it was Senate Majority Leader Mitch McConnell's defense of this move that instantly became a battle cry for feminists everywhere. “Sen. Warren was giving a lengthy speech,” McConnell said, according to The Washington Post. “She had appeared to violate the rule. She was warned. She was given an explanation. Nevertheless, she persisted.”

The next verse of the song reflected on other woman-centric highlights from 2017, including Wonder Woman setting records at the box office, ("Who knew you could direct when you have boobies?") Cardi topping charts, Beyoncé having twins, Megan Kelly leaving Fox for NBC. It's the third verse that literally made me LOL:

The old Harvey Weinstein can't come to the phone right now. Why? Because .. this is the year we all stood strong. No one wants to see your nasty-a** dong. Back off all you producers and actors, end up in the trash like The O'Reilly Factor. Because when you look at the patriarchy ...

That's when D.J. Mansplain — aka The Daily Show's Michael Kosta, according to Vanity Fair — interrupted to mansplain why the backlash against men isn't fair. "Men are from Mars, women they're from Venus," Kosta raps. "Nobody likes a surprise penis. But maybe you asked for it. It's kind of on you. We men are dumb, we can't control what we do. Too many men this year acting like stalkers. It makes me so sad, I've got a daughter. And that's all the time I've got to mansplain. Time for the hook, yo ladies hit that refrain."

"No, we're not doing that. Get the f*** out of here," the ladies shoot back. "Yo Hillary Clinton, take us home!" Enter: Hillary Clinton belting out — proving that she's not just going to "shut up" after her election loss, as Sen. John McCain has called on her to do, according to People. Although I'm pretty sure it's not Clinton's actual voice, her cameo is epic nonetheless. And it's exactly what we need to end this mess of a year on a high note. Here's to 2018 — ay women continue to kick a** and take names — only with infinitely less sexism, sexual misconduct, oppression and mansplaining.