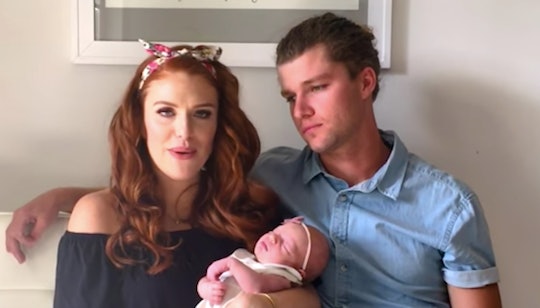 Ever since Little People, Big World star Jeremy Roloff welcomed his daughter Ember into the world in September 2017, fans have praised his parenting skills. Most of Roloff's supporters are really impressed by how quickly he adapted to this major life change, while others give him credit for being such a hands-on dad. Unfortunately for Roloff, however, the good will from fans came to an abrupt and somewhat strange end on Jan. 5. Apparently, this video of Jeremy Roloff tickling his daughter is infuriating to a lot of people, and you might be surprised by the interesting reason why.

If you keep up with Roloff's wife, Audrey Roloff, then you know that she often posts videos and photos of Ember to social media. So, it's safe to assume that Audrey probably didn't think twice when she uploaded a cute video to Facebook of Jeremy tickling Ember right beneath her chin. Audrey captioned the seemingly sweet vid, according to The Inquisitr: "These two are my favorite."

And at first glance, there doesn't appear to be anything out of the ordinary or wrong with the post. For starters, Ember is giggling throughout the entire video and she has a big smile on her face. Not to mention, Ember looks super cozy and content in an adorable onesie paired with dark grey socks. Sounds pretty innocent, right?

Check out the video for yourself below:

Shortly after Audrey shared the video, many commenters took to the post's comments section to argue that it's not OK to tickle your baby.

One person said, according to Facebook: "You are not supposed to tickle a baby. Ask your doctor." Someone else added: "Don't tickle babies it will make them stutter. It hurts their nervous system. Think what it does to you if someone holds your arms and tickles you."

And a particularly incensed fan wrote: "NOT a good idea to tickle a child. It renders them absolutely HELPLESS with a natural uncontrollable response of laughter. There are much better and more healthy ways to make a baby laugh!"

Personally, I had never heard of these supposed tickling dangers before. It's just something I hadn't ever considered, but there is medical literature out there on the subject.

As for whether tickling your baby can lead to stuttering, that's a myth. Dr. Laura Jana, a board-certified pediatrician, told Babble:

... tickling is not the cause of stuttering. While there are several theories that attempt to explain the cause of developmental stuttering (also sometimes referred to as “stammering”), the true cause is still unknown.

One possible cause for stuttering is genetics. Dr. Lisa Scott, the Director of Clinical Education and Research Associate in the School of Communication Science and Disorders at Florida State University, wrote in article for Stuttering Help:

The evidence for genetic factors in stuttering is overwhelming, with genetic factors playing a role in at least half of all cases ... In other words, if you have a family member who stutters, you are more likely to stutter.

Translation: tickling has nothing to do with stuttering.

So, what about the claim that tickling your baby "renders them helpless?" It turns out there might be a tiny sliver of truth to that assertion.

A study from October 2015 found that infants in the first four months of life can't connect the sensation of tickling to a direct source. Researchers determined that this phenomenon occurs because young babies have trouble connecting sensory worlds together, which explains why a baby might be able to perceive a physical sensation without registering its visual link.

So, if you tickle your 2-month-old baby's toes, for example, they would feel the tickling sensation but they wouldn't be able to tell that you're the one who did it. Sounds strange, right? Considering it might be a bit uncomfortable and even troubling to experience a sensation without knowing where it came from, I can sort of understand why some fans might be against tickling a young baby for this reason.

But it's worth noting that Ember just hit the 4-month mark on Wednesday, so she's on the cusp of being able to tell where tickles are coming from.

But what about the claim that tickling a baby can damage its nervous system? I haven't found any research or articles confirming this notion, so I'm going to go ahead and say it's false.

I think the main takeaway here is that it's totally safe to tickle your child. Although it might be a bit strange for a baby to experience a tickling in its first four months of life, it won't cause any physical harm. In short, Roloff's haters can relax.