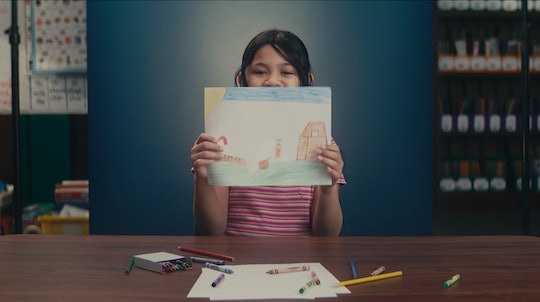 When it comes to gender diversity, for all the strides we've made, there's still so long to go. Perhaps there's no better illustration of this than the way our kids perceive certain roles and jobs. And this video about kid's perception of gender in the food industry is eye-opening, and comes just in time for International Women's Day.

In honor of IWD, Tyson released a #WhyNotHer campaign video, in which they asked a group of children to draw pictures of people working in the food industry. First, they were asked to draw a picture of a farmer, a chef, or a truck driver. Unsurprisingly, each of them drew a man in those roles, while the video showed footage of women in stables, feeding chickens, driving trucks, and so on.

As the children described what they see those workers like, they always used the "he" pronoun. "I drew a chef, he's wearing a black suit and a black hat" one said, "He would have utensils like pans, and pots," said another. "I drew a nutrition scientist, he's wearing a lab coat with jeans and red shoes." However, the video culminates with one little girl drawing a picture of a female scientist, and when asked why she did that, she responded: "I guess so it could be me."

Of course, that last line really sums up the incredible importance of all kinds of diversity: the more we can see ourselves, the more we believe in what's possible for us.

As part of the campaign, Tyson also interviewed some of the women featured. In one post, Stoni Jo, one of the poultry breeders who was featured in the video, talked a bit about what her life is like on the farm, and how she balances her job with her role as a mother and wife.

"Being a breeder is really hard work, but I’m so proud of what we do on our farm and the animals we’re raising," she explained. "My farm collects eggs from our hens, and when the chicks hatch, they go to another farm to be raised. My husband, my children, my in-laws — we’re all in it together and we each play an important role in the day-to-day work. The best part is that because we own our own business, it allows for flexibility."

Jo continued, according to Tyson: "While the hours are longer than most day jobs, and nights and weekends will always be included, I can carve out time to see my daughter off to school in the morning or we can run errands knowing that other members of the family are watching over things back at the farm."

In addition, the company is also noting some of the most significant contributions made by women in history, many of which aren't commonly known.

For example, as the company noted, Sybil Lundington was a 16-year-old girl who rode twice the distance that Paul Revere did in order to inform local militia that the British Army had landed on the coast. It was a woman named Elizabeth Magie who invented the game Monopoly. Maria Beasley invented the life raft, and Josephine Cochrane developed a "machine which included a motor turning wheel inside a copper boiler," known to us today as the dishwasher.

It's incredibly important to not only highlight and remind everyone of what many history books failed to include: that there are contributions made to our society by many people previously relegated to the margins. Movements like #WhyNotHer are important for challenging and correcting preexisting and unhelpful perceptions about roles that do not have to be gender-exclusive. As we already know, the more our children can imagine themselves doing anything, the more likely that they will.

More Like This
Here’s How To Fight For Abortion Rights
Obamas Issue Powerful Statements After Supreme Court Ends Roe v. Wade
Keep Talking To Your Kids About Abortion — It's More Important Than Ever
Dads Share What Paid Family Leave Would Mean To Them In Heartwarming Video