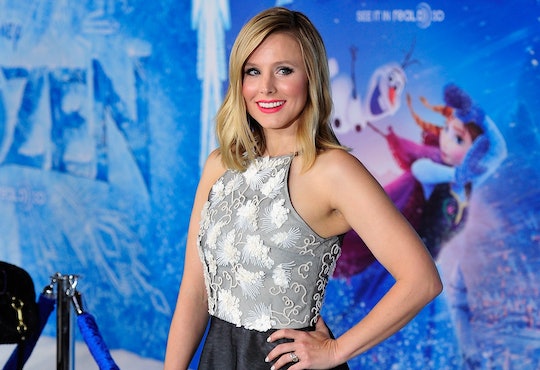 I've been a little conflicted about my feelings toward Kristen Bell. On one hand, she's hilarious and talented actress who can make even appliance commercials entertaining, she's refreshingly honest and insightful about marriage and parenting, and she basically got the paparazzi to stop bothering children. On the other hand, Frozen. I do not care for Frozen. But this video of Kristen Bell's daughter singing "Let It Go" has actually made me want to forgive her for the terror she hath wrought upon the screens and ears of America.

"No pants, no problem. The show must go on!!!" Bell captioned an Instagram video of her 3-year-old daughter, Delta, screeching the lyrics to the most insidious song in the history of soundtracks. "A good wedgie always helps me hit the high notes, too," reads the parenthetical follow-up, a nod to the fact that Delta is clad in nothing but underwear as her shrill cries echo down the hallway. If you think I'm being harsh on the little darling, you can go ahead and listen for yourself. Shrilly is the only way one can sing that song, and for bonus points she literally screams at the end. As one does.

It's awful, and that's why I love it. Let me explain: my family has a tradition of going to the movies on Thanksgiving. We started it in 2011, when my son was just shy of 3. We saw The Muppets. It was great. The following year, we saw Wreck-It Ralph, which was delightful. Then, Thanksgiving 2013 rolled around, and the only children's movie in theaters was Frozen. My son only watched Nick Jr. at the time, so I hadn't really seen much advertising for it. I didn't even realize it was a musical. Go ahead and laugh; all of my friends did, too.

So we saw Frozen, and nobody enjoyed it. Not only is it a musical, but the songs are sung in that overly-emotional Broadway style that I absolutely can't stand; the kind that reminds you of that one kid from the school play who thinks they're destined for greater things (or Rachel from Glee, if you prefer). And worst of all, everyone fawned over how feminist it was, because it was about the relationship between two sisters. No, it isn't! It's a Disney princess movie! And the "hero" still needs a man to help her with her quest — three, if you count the snowman and the reindeer. Whoopee, Elsa tells Anna she can't marry a man she's just met. She still ends up with some other dude at the end. And don't get me started on the trolls or the way their parents handle things. Just don't.

Well, it turns out that the misplaced praise wasn't actually the worst part about Frozen. The worst part was that still to this day, nearly five years later, every little girl I've ever met between the ages of 2 and 10 is obsessed with it, particularly with Elsa. I mean, I get the fascination with her dress, because it's dope as hell. But do they have to keep singing that damned song? Always with the song! Enough, already!

I never even stopped to consider that Bell has two little girls of her own, and what that might mean for her. What it means is that she has to hear that song over and over, as well. Delta owns that same obnoxious light-up singing doll that everyone else's daughter has. But she's got it worse than the rest of it. Bell, who played Anna, the actual protagonist of the film, has two live with two little girls who think the sun rises and sets on Elsa, the antisocial plot device of a sister who has a temper tantrum that nearly kills her entire country. Imagine how that must feel. Girl, I forgive you. You clearly didn't realize what you were doing, and you've been punished enough.