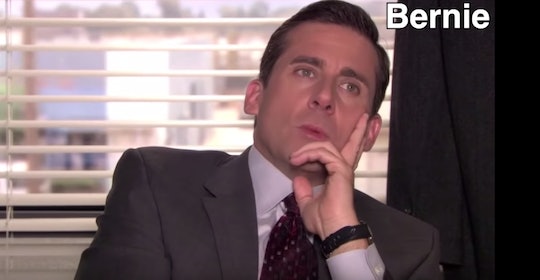 Election Day 2020 may still be more than a year and a half away at this point, but presidential campaigns are already underway. With the field of Democratic candidates seemingly increasing by the day, it can be difficult even for someone who follows along closely with politics to keep up. Let alone keep track of what sets each candidate apart from the rest. Well, never fear! Because this video of Michael Scott as the Democratic candidates is way too accurate. And it just might help catch those who have been slacking with their candidate research up to speed.

Yes, you read that correctly: The Michael Scott. He definitely wouldn't be the first person who pops in mind. But who knew Steve Carell's character from The Office could could so expertly describe the politicians vying for the Democratic ticket? As Rolling Stone reported, a reporter at the Washington Free Beacon, Alex Griswold, is the person responsible for this supercut gem titled, "2020 Dems As Michael Scott Quotes." And if you happen to be a fan of The Office, you'll probably be thinking, "Why didn't I think of this first?" Because guys, these clips perfectly capture the knee-jerk essence of the Democratic candidates. Don't believe me? Check it out for yourself!

Although Joe Biden hasn't officially thrown his hat into the ring for the 2020 democratic ticket, Griswold represents the former VP as Michael Scott getting awkwardly affectionate with Phyllis

For Kamala Harris — who has a complicated history when it comes to the topic of prison — there’s Michael Scott locking his employees in a conference room and then shouting, “If you think prison is so wonderful, then enjoy prison!”

There's even a fitting Michael Scott clip — during which he awkwardly declares that he's 2/15 Native American Indian — for Elizabeth Warren. Warren controversially had a DNA test proving that she has distant Native American ancestry, according to NBC News. (She has since apologized for doing so.)

Yet another spot-on moment is Michael Scott as the ever-suave Beto O'Rourke. “I have flaws — what are they? Oh, I don’t know. I sing in the shower, sometimes I spend too much time volunteering, occasionally I’ll hit somebody with my car.” LOL.

In case you were wondering, Twitter is pretty much convinced this video is perfection. "I'm confident this is the greatest thing you've ever done," one person commented.

Another Twitter user wrote, "Well, that was surprisingly on point! And funny."

Yet another person simply wrote, "Great work," alongside a GIF of Michael Scott saying, "Boom roasted."

Look, I'm an extremely liberal person — and I still think this Michael Scott supercut is spot-on. I realize there's way more to these candidates and their platforms than a single clip from The Office can summarize in a few seconds. (So I wouldn't dare judge them solely by this video.) When election time comes, you can bet I'll be taking a serious look at each and every one of them. But for now, I'm just going to watch this video again and laugh my butt off. Because Michael Scott. The end.