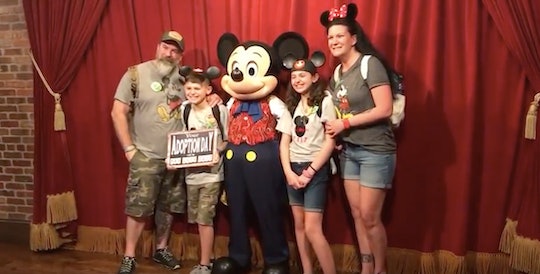 It's no secret America has had a tough ride over the past six months. From President Donald Trump's incessant antics to the GOP's never-ending crusade to repeal Obamacare, things have been bleak, to say the least. Although it might be tempting to give up on humanity altogether, this video of Mickey telling two kids they're being adopted will bring your cold, dead heart back to life, so don't throw in the towel just yet.

Before I get into this tearjerker of a video (trust me, you will cry), here's a little backstory on the people involved. A married couple named Courtney and Tom Gilmour had been fostering two children, 12-year-old Janielle and 10-year-old Elijah, for three years, according to Babble. As anyone who has been through adoption knows, the process can be long and emotionally taxing. Luckily for Courtney and Tom, they finally got an adoption date after years spent parenting Janielle and Elijah. To celebrate, Courtney and Tom organized a special trip to Disney's Magic Kingdom, where Janielle and Elijah had both had "happy" times in spite of their rocky childhood.

Now that you're all caught up, take a deep breath, grab a tissue, and watch the emotional moment unfold:

OK, raise your hand if you lost it when Janielle and Elijah broke down in tears. It's safe to say this video is one for the books.

Once the video went viral (it was first posted on July 6), Tom took to Facebook to express thanks for the public's support. In a post on Tuesday, Tom wrote:

As foster parents it's been Courtney and my greatest joy to be able to shine a light into our two special kids lives in the hopes of providing them the hope and love they deserve. When the time came to let these our kiddos know that they had been given a date for their adoption, a day they had been fighting for for a long time, we knew it was a big deal. Courtney cooked up a special plan, and Disney provided a little of their trademarked magic to make it extra special. In the somewhat dark world we live in, where often times people are looking to take each other down, it makes me smile to see our light spread a little bit further. It makes me very happy that the joy our family felt on this day is more universal. Last night this video started going truly viral. At this point we're well over 200,000 views, 2600 shares, 1,000 comments and over 4750 likes! Feel free to share, and help us keep the positivity growing and going! Extra special thanks to Aunt Vicki for filming, and EVERYONE at Disney for making this incredible moment happen.#fosterparenting #adoption #disney #magic

Although there are a lot of great things to say about this video, Tom hit on an amazing point in the post when he said, "In the somewhat dark world we live in, where often times people are looking to take each other down, it makes me smile to see our light spread a little bit further. It makes me very happy that the joy our family felt on this day is more universal."

As Tom wrote, love is a universal feeling people can always latch onto amid all the darkness. Whether you have ties to adoption or none at all, this video is a reminder to let love lead you in the right direction.