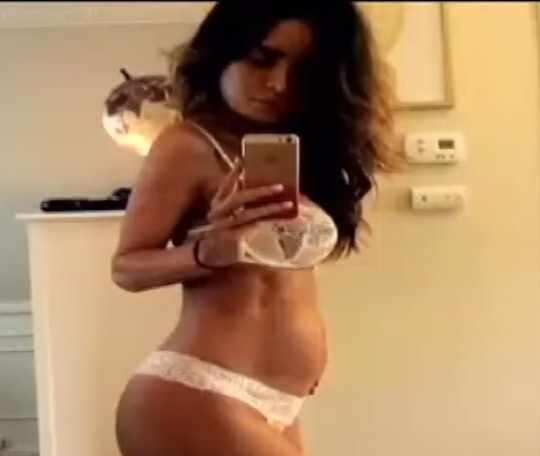 Former lingerie model Sarah Stage first catapulted into internet fame back in 2015, when she was pregnant with her first child and still rocked clearly defined ab muscles. The ultra-fit Instagram star quickly gained the nickname "six pack mom" because she still sported impressive abs and a relatively small baby bump by the time she had reached full-term. In November, Stage welcomed her second child. And it seems she's already back in the game when it comes to her exercise regimen. This video of the "six pack mom" Sarah Stage working out with her newborn is eliciting mixed reactions.

On Saturday, Stage shared an Instagram video of an exercise routine she completed with the "help" of her two adorable sons — 2-year-old James and newborn Logan, according to Us Weekly. The 33-year-old mom can be seen doing lunges while holding her baby, doing leg lifts with James as the "weights," doing squats, and more. In her post, Stage also shared words of encouragement to her followers. "No excuses! This morning was my first time working out in 9 weeks," she wrote, according to the publication. "And although I have a long way to go to build my muscle strength and endurance back up again, (so please don’t body shame .. again ! As we all are different shapes and sizes ) luckily there’s an inner strength thats been building since I’ve had time to reflect."

Stage also shared that she's happier when she focuses on living in the moment with her children and lowers her expectations of what needs to be done in a day. "I’m more content because I know I can’t get these special moments back and all the little things don’t matter," she wrote. Stage continued:

I’ve also realized that it’s important to also make self-care a priority and try to do something for ourselves daily, this morning for me, it was doing a 20 minute workout at home. I know some mothers feel guilty about doing things for themselves and I’ve even gotten mom shamed for taking the time out for myself but if we are happy, then that makes us better wives, friends, daughters. mothers etc.

An overwhelming majority of Stage's followers chimed in with supportive messages. One fellow mom commented, "Girl! I so admire your strength....our hardest job on the planet is raising babies! Continue to encourage those who need it that they don’t have to look a mess in order to be considered a great mom! Shout out to all you bossmommies out there!" Another Instagram user chimed in with, "You’re my “I have 2 kids but I’m still gonna get fit” inspiration! Haha. It would be so easy to make the excuse that you’re too busy but children deserve a happy, healthy mama who has the energy to jump and play. You do you girl and ignore the haters!" Yet another person commented, "You are an inspiration for all mothers. Thank you and keep up the positive vibes."

However — as with her pregnancy posts — there were still a number of negative comments sprinkled in there, too. "Way to give the kid brain damage," one Instagram user wrote. "Recommend you sit down and eat!!" someone else commented. "This is not fitness this is sickness," yet another person commented. Just for the record, a woman can generally return to exercising six to eight weeks after having a c-section (like Stage did, reported Cosmopolitan,) according to BabyCenter. So she's good to go. And c'mon, brain damage? Relax, trolls. This mama has everything under control.

I've never had anything close to a six pack, but I can still relate to Stage on some level. See, I ran and lifted weights all the way up through week 30 of my last pregnancy. (Then I switched to the low-impact elliptical because the pressure "down there" was getting to be too much. Sorry, TMI.) Still, as you can imagine, I got some pretty weird looks, along with plenty of rude comments, about my continued exercise. And guess what? Because I stayed active throughout my pregnancy, I was able to return to running two months later — and run a marathon four months after that. It wasn't easy. But with a lot of dedication (and a little creativity, at times,) I made time to put the work in.

So keep up the hard work, mama! You're doing great with two little ones who demand so much of your time and attention. But judging by the crazy amount of views your most recent video has attracted (more than 1 million!) it's obvious so many people find inspiration in your journey. I know I do.