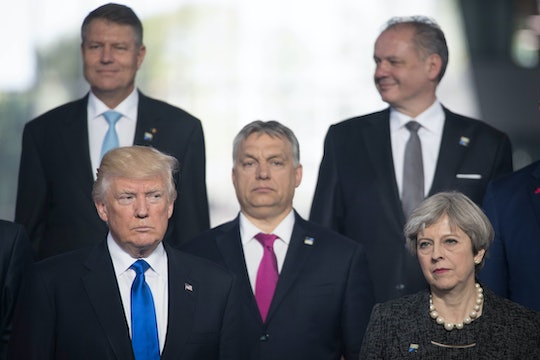 Video Of Trump Pushing A PM At Nato Isn't Good

On Thursday, President Donald Trump continued his busy week of engagements with foreign leaders by appearing at his first North Atlantic Treaty Organization meeting in Brussels. NATO, which is primarily concerned with peace-keeping and conflict prevention amongst nations around the world, was called "obsolete" by the president during the election, according to CNN. While his remarks at NATO during his visit weren't exactly favorable, it's this video of Trump pushing a prime minister at NATO that has the internet up in arms.

There are currently 28 countries who are members of NATO, according to the official website, including the United States. During the election, Trump was dubious that the organization had value, and he specifically criticized its spending — a refrain that he repeated during his visit to the organizations new headquarters in Brussels, according to The Washington Post. The Post also reported that Trump claimed in his speech that “23 of the 28 member nations are still not paying what they should be paying and what they are supposed to be paying," and didn't seem to include any kind of reassurance to other members that he intends to keep the U.S. active and committed to NATO activities.

While his remarks may have been discouraging, it was a video of Trump standing with other NATO leaders that grabbed the internet's attention Thursday morning. In the video, which began circulating on Twitter, it appears that Trump is nudging aside another member of NATO in an attempt to move to the front as they toured the organization's new headquarters. Romper's request for comment to the White House regarding the alleged shove went unreturned.

Twitter quickly identified the leader Trump appeared to have shoved as Duško Marković, the current Prime Minister of Montenegro, according to Business Insider. Montenegro is actually slated to become the 29th member of NATO later this summer, according to The Washington Post.

Twitter in particular picked up on the apparent affront, which came not long after Trump's speech in which he criticized the alliance and many of its members. These remarks were delivered before a memorial erected in memory of 9/11 — which is the only occasion on which NATO invoked the mutual defense provision of its agreement (called Article 5), thus becoming involved with the war in Afghanistan, according to CNN. In his speech before the memorial, Trump did not — as many NATO members had hoped — express intention to keep the U.S. committed to adhering to Article 5, according to The New York Times. Article 5 essentially states that if any member of NATO is attacked, it's as though every member of the alliance as been attacked, and the priority of all nations adhering to the provision becomes being an ally to the nation under siege.