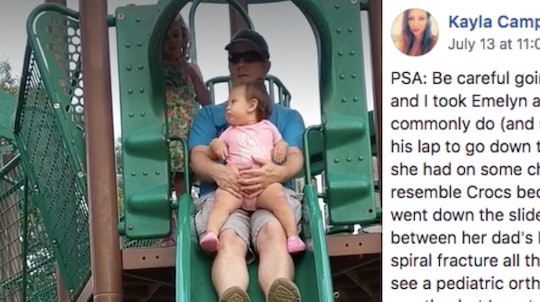 There are few things that young kids love more than getting the opportunity to run around and play at the park. But even though modern playgrounds have definitely become much safer than the wood-and-metal death traps of the '70s and '80s, careful hovering behind youngsters on neighborhood climbing structures has basically become a built-in requirement of any park trip. It turns out, though, that one of the biggest playground dangers is one that few parents even know about — and it's why this video showing the moment a baby fractured her leg while on a slide with her dad should be required viewing for everyone.

Taking your little one down the park slide almost seems like a parenting rite of passage, and until they're old enough to ride down confidently on their own, going down the slide with your kid also feels like the best way to let them experience the fun without the risk. But on July 13, Virginia mom Kayla Campbell learned a heartbreaking lesson: that going down the slide with your child on your lap isn't actually safe at all, and that it can actually lead to some pretty serious injuries.

In a Facebook post that has since gone viral, Campbell wrote that she and her husband took their two children, 14-month-old Emelyn, and 6-year-old Joseph, to the park, and just as they had done countless times before, they decided to bring Emelyn down the slide. Campbell prepared to film what was just supposed to be a sweet family moment between her husband and daughter, but as they slid down, Emelyn's foot became caught between the slide and her dad's leg. And though it only took a moment, it caused "a spiral fracture all the way through her tibia," leaving the tot in a cast, according to her Facebook post.

Knowing that the video inadvertently captured the break as it was happening, the clip is honestly pretty hard to watch. But Campbell told Romper that, even though she knew she would inevitably face backlash from online trolls trying to blame her for the incident, she wanted to post the video publicly in an effort to raise awareness.

"I had absolutely no idea it was safer to have her go down a slide alone than it was in our laps," she told Romper. "[After the post went viral,] I braced myself for the 'perfect parents' to come crawling out of the woodwork to tell me everything we did wrong, blaming my husband/me, and of course saying how they'd never do something like that because it's 'common sense.'"

She continued, "But I've actually had a lot of people sending me messages telling me to ignore all the nasty comments and how supportive they are of me for sharing the accident to help warn other parents. The support I've received has been amazing."

Even though it makes sense to think that taking your child down the slide on your lap would make it much safer, as Campbell noted, it's actually the exact opposite. A 2009 study from Winthrop University Hospital that analyzed pediatric leg fractures over an 11-month period found, for example, that nearly 14 percent of them happened because toddlers were riding down the slide with a parent, according to The New York Times. And in 2017, the American Academy of Pediatrics estimated that around 352,698 children under 6 were injured on slides in the United States from 2002 through 2015, most of whom sustained leg fractures. What's more, according to the AAP, toddlers between 12 to 23 months were the most likely to be injured, particularly when they were going down the slide on an adult's lap.

The reason is mostly that the added weight of going down a slide with an adult means that "there’s more forward momentum and speed," according to The Independent, making a break much more likely to occur if a child's foot gets caught than if it were to happen while they were alone on the slide. And as Campbell pointed out in her post, certain other normally-harmless factors — like wearing shoes with rubber soles — can also make fractures more likely to occur. As a result, the AAP has emphasized that there's actually no safe way to take a child down a slide, and that the safest option is just to avoid it entirely until they're big enough to go down alone.

The good news, at least, is that Campbell told Romper that Emelyn "is doing better," in the week since her accident, and that "she's figured out how to crawl and stand up while holding on to things for short periods." Moving forward, Campbell says she understands now that Emelyn simply isn't old enough to be on the slide — and hopefully, by sharing her message, other parents of young kids who haven't been told of the dangers will be able to come to the same realization without having to experience an injury.

It can sometimes feel like absolutely everything should come with a parenting warning label these days, and the fact that the internet is full of horror stories about accidents involving children certainly doesn't do much to help ease parental anxiety. But in some cases, all it takes to prevent a serious injury is a little awareness. So while taking your baby down the slide for the first time might seem simply like a sweet parenting moment, very real injuries can, and do, occur. And the more we continue talking about it, the better.