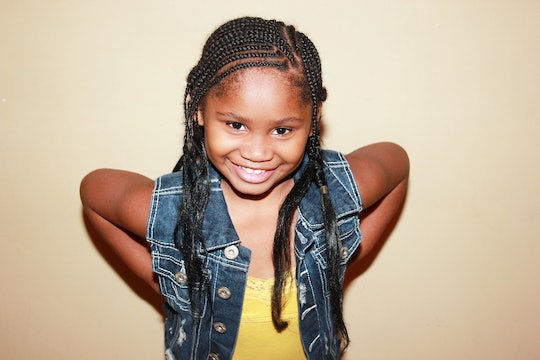 In elementary school, I had a classmate named Vida. She'd constantly get in trouble for talking, and was often asked to leave the classroom. Most of the time, she was loudly defending herself if someone said something insulting, but to the teachers, she looked like an instigator. There is probably a Vida in every single classroom across the country. That's because black girls are far more likely to be punished and suspended from school than white girls. The National Women's Law Center posted a video that shows that racism is disrupting black girls' educations, and it's extremely frustrating.

The National Women's Law Center posted a video to Facebook last week that highlights the experiences of black girls in school. The video shows black girls with the words "aggressive," "loud," and "unladylike" written on their skin: all words black girls are unfortunately quite familiar with.

Expectations of both race and gender play a role: a report from the African-American Policy Forum shows that, while black boys are suspended three times as often as white boys, black girls are suspended six times more than white girls. Six.

That's because the "loud black girl" stereotype goes against traditional standards of femininity, including the belief that female students are supposed to be quiet and sit still, and black girls pay the price for it.

Pushing black girls out of school has devastating consequences. Once they've been suspended, their grades drop because they have to catch up on school work, according to NWLC's "Toolkit to Stop School Push Out for Girls of Color." Girls who are frequently punished and suspended are likely to lose interest in school.

Unfortunately, some end up dropping out of school or even end up in the juvenile justice system. “We need to stop these push-out practices that criminalize girls for who they are instead of what they’ve done,” Monique Morris, author of Pushout: The Criminalization of Black Girls in Schools, told me in 2014.

She told me that black girls are often punished for being loud even when they aren't being disrespectful. “It’s cultural for black girls to speak up, and they are going to fight back if something is wrong.”

Both the National Women's Law Center's video and examples highlighted in the African-American Policy Forum report show that black girls get in trouble for things as simple as asking a question or writing "hi" on their locker.

In her book, Morris spoke with black female students who shared their experiences, a few of which NPR highlighted. "In school, if you get in an argument with a teacher, you damn near lost. ... If it's a student and teacher, the student's automatically in trouble," a 15-year-old student named Faith told Morris.

What's sad and frustrating is that some of these girls are reportedly being punished simply for being black. The video shows a black girl who was sent home for wearing a natural hair style, as well as a girl whose teacher cut her braids when she was playing with them. Incidents where black girls are punished or sent home because of their hair happen far more often than they should. That's because some educators have yet to learn that a black girl's hair isn't a threat: kicking her out of school is.

Combating stereotypes seems difficult, but parents and educators can look out for school policy to see if they punish students for vague "attitude" violations and advocate to make sure schools have accurate data about who is being suspended, the National Women's Law Center wrote.

We need to help black girls wipe off the words they've been labeled, as they do in the video, and help them to be able to call themselves "strong" and "leaders." We need to embrace what a black girl has to offer the world, and let her learn.