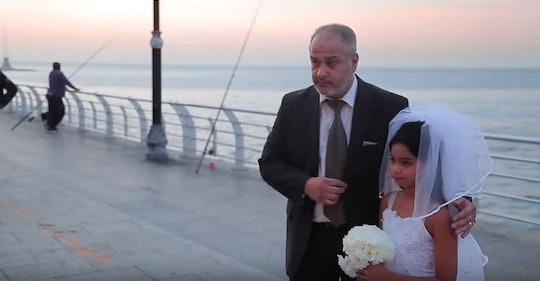 Most people have at least heard about child brides in passing through some kind of social media campaign. And the idea is awful. But a new video produced by an organization called KAFA, which translates to "enough" in Arabic, is fighting the practice of marrying little girls to much older men by giving the world a hard look at what a child bride looks like on her wedding day. The intent of the video, which has gone viral, is to make people wake up and acknowledge that child marriage is still prevalent. In the video, a middle-aged man poses as a groom taking seaside wedding photos with his new bride — a beautiful little girl only 12 years old. This shocking video of a child bride in Lebanon is something every mother needs to see and get very angry about.

The thought of that old man consummating a marriage with this precious child is hard to get out not acknowledge. And, as people taking in the ocean air pass by the scene, the reactions are gripping. One man actually congratulates the groom on his wedding day. Some just snap photos. Another calls him a criminal. And his response seems very true to life, "This is none of your business," he replies. "I got permission from her parents."

In Lebanon, girls as young as 9 years old can be married off to an older man with their parents' permission. Girls as young as 14 are legally allowed to marry without their parents' permission. KAFA wants new legislation passed that would require marriages involving children to be overseen by a judge, instead of a religious tribunal, but so far the bill has been ignored in the Lebanese parliament.

As the mother of a daughter, it's the reaction of a mother who just happened to be jogging by the couple in the video that moved me to tears.

"Where is your mother?" she asks the girl, panic obviously coming over her. "I am taking her with me! We are all going with her. How can I leave? She is like my daughter."

These little girls — estimated by the United Nations at 37,000 every day — who are being married off to older men are people's daughters. KAFA made this video to get people's attention in the most shocking way possible. And I think it's safe to say it worked.

Crippling poverty is what drives many families to give their daughters to much older men as brides. One in three girls from middle- to lower-income households will be married off before they turn 18 and one-third of those will marry before they turn 15.

Let's all be that hysterical parent willing to do what it takes to protect these young girls. The world needs to pressure countries that allow these practices, but people also need to acknowledge the root of the problem: crippling poverty and the treatment of women as objects for sale. By raising awareness, people can help put a stop to this horrific practice traumatizing generations of girls for the rest of their lives. KAFA is starting a campaign to say #IDONT to child marriage and every parent (or person, generally) needs to do what they can to help.