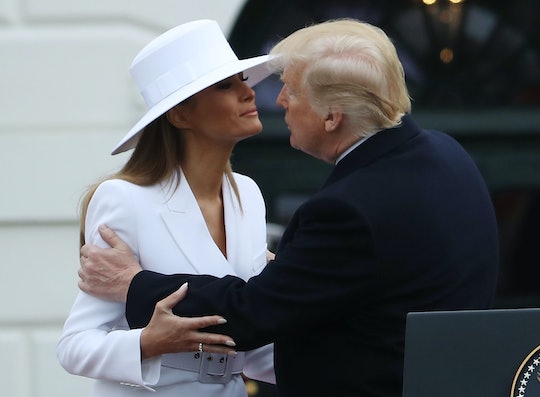 Though President Donald Trump and First Lady Melania Trump don't exactly have an aspirational relationship, they usually make an effort to save face. For the most part, Melania expresses solidarity with her husband — regardless of how questionable that may be — and though she spent the majority of his campaign and early presidency at home in New York raising their son, she is usually seen by his side for important events and appearances. That said, some things do slip through the cracks, like this viral GIF of Trump trying to hold Melania's hand, which will definitely make you cringe.

TMZ reported that, while at an event to honor French president Emmanuel Macron, Donald and Melania were standing next to one another when Trump tried to use his pinky finger to nudge her hand into his. Melania didn't budge, so Trump then took the top of her hand and tried to shake it a few times. Still not giving in, he looked down, and then to the side, before placing his hand back down. The whole thing was an awkward spectacle, made no better by the fact that her apparent unhappiness is, well... apparent. The reports may say she's allegedly miserable, but stuck, yet we can't know that for sure unless she explicitly says so. However, a GIF is worth a thousand words.

Despite how easy it is to thwart any feelings of pity for her (she has been complicit in his agenda, to say the least) the reality is that it is clear she's being touched in a way that she doesn't appear to be happy with. That's not acceptable, no matter who you are.

This is also far from the first time something like this has occurred. During Trump's inauguration, a video of her smile dropping into a frown when Trump turned away from her went viral, and then in May of 2017, CNN reported that her hand swat was another sensation, referencing a video in which she literally pushed her husband's hand away when he reached for hers. A similar video became popular this past February for the same reason, this time with people speculating that Melania drapes coats over her shoulders so that she won't have to hold the president's hand.

Those one-off incidents don't seem to be isolated, either. Vanity Fair mentioned in one report on Donald and Melania's relationship that her stiffness is on display often, specifically referencing their awkward first dance to "My Way" (a fitting song choice) at his inauguration.

Melania has also remained silent in the face of Trump's ongoing sexual misconduct allegations. The Guardian compiled statements from all the women who have accused him, with claims ranging from forceful kissing to literally touching women's vaginas without their consent (bearing eery similarity to his infamous "grab them by the pussy" remarks). All of this was also before any of the Stormy Daniels allegations came out, in which she claimed the two had an affair not only while he was married, but while Melania was pregnant. (Trump has denied all of the harassment and assault allegations, as well as the claims from Daniels, though his representative has not responded to Romper's requests for comment.)

However, Melania's disengagement isn't altogether too surprising considering that Donald has been transparent about preferring a more distant relationship between them. In 2005, he told Larry King:

In April of 2016, Melania echoed her husband's sentiment, telling GQ: "We know our roles." Know them they might, but being happy about them is another story.