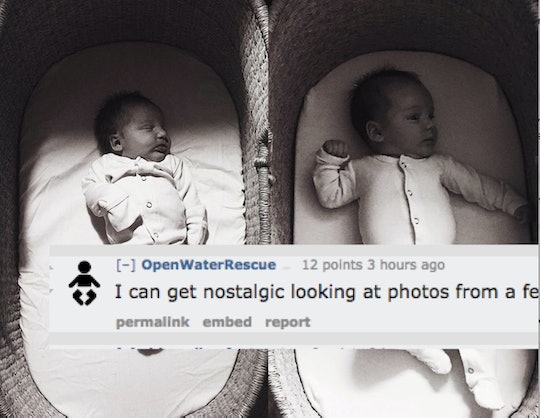 This Viral Newborn Photo Will Make Any Parent Cry

"They grow up so fast." If you're a parent, you've probably heard that line from veteran moms and dads approximately 17 times a week since your first baby was born. But as another trite-but-true idiom goes, a picture is worth a thousand words, and this viral newborn photo will make any parent tear up, because it shows, rather than tells, just how quickly infancy flies by. Reddit user JawshByair shared a side-by side comparison of his daughter, Aida James, at birth and 2 months old, and even if you've lived though it yourself, it's still mind-blowing to see how much a baby changes in such a short amount of time.

In the first photo, Aida is dwarfed by a bassinet that could easily fit four or five of her, her tiny hands obscured by the sleeves of her one-piece pajamas, despite the generous cuffs. Just 60 days later, though, it appears that Aida's about to outgrow both the bassinet and the outfit, and the squishy newborn face that was once all cheeks has given way to more distinct features, hinting at the full-fledged grownup she's fast on her way to becoming. It's a cruel cosmic joke that parents are completely sleep-deprived during those first few weeks when babies are at optimum cuteness, and those days are gone before we know it.

The comments on JawshByair's post were a mix of hilarious and nostalgic. User fishy007 wrote, "A little water and sunlight and these things will grow like weeds!" And user TheOriginalFinchy stuck with the plant metaphor, writing, "Dude, you're over fertilizing. Back off on the nitrogen." User ttotheodd, who also has a 2-month-old, could totally relate, writing, "Mine is almost 2 months, I really noticed it when I tried to fit him on the little changing table thing over the pack and play and his feet started to hang over."

Seeing Aida's photo won't just have parents feeling nostalgic for the newborn days, though. As we all know, those babies keep on growing, and each new developmental stage brings about the end of the previous one. In that way, a parent "loses" various versions of their child as they age. If you've ever gone down a rabbit hole of old smartphone photos and videos of your child, thinking about how you "miss" someone who's actually 10 feet away from you, you know what I mean. And if you sometimes wish you could trade your sassy 7-year-old for the chubby-cheeked people pleaser they were two years ago, you're not alone.

Luckily, while previous generations of parents had nothing but shoeboxes full of dusty Kodak prints to remember their babies with, today's parents are reminded of what their child was like "On This Day" every time they log in to Facebook. And remember, while you can always look back at their cute little faces, their tantrums and bad attitudes will remain forever in the past. And as they get older, they get so much cooler, too. Instead of wishing you could hold your daughter in one hand again, look forward to the day when you can show her your favorite R-rated movie, or take her to a concert. Or better yet, just enjoy her today. Unless she's 3, of course, because 3-year-olds are the worst.